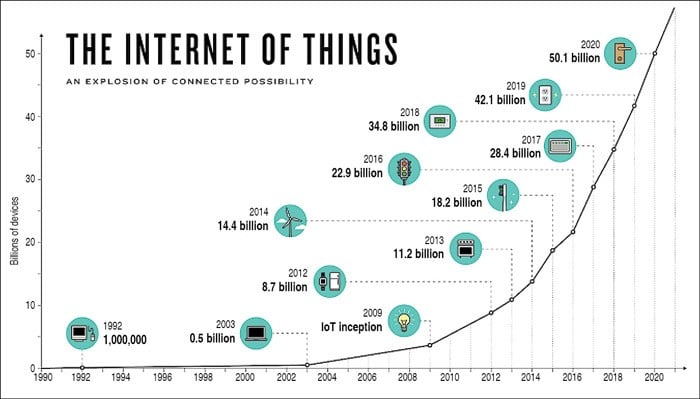 The Internet of Things (IoT), defined by the Oxford dictionary as a proposed development of the Internet in which everyday objects have network connectivity, allowing them to send and receive data, is the next big thing in embedded computing. Most of the information available on the Internet is made and added by human beings, but the IoT can change all this—data-collection by connected widgets can drastically change what we know about the physical world.

A boom owing to the arrival of the IoT is expected to connect a very large number of devices to the Internet. One major drawback was the limitation of 4.3 billion unique addresses posed by the IPv4 protocol. This issue was addressed with the development and subsequent adaptation of IPv6, which allows a nearly unlimited number, 2128, or approximately 3.4×1038 unique addresses. Gartner, the American research firm, predicts nearly 26 billion devices on the IoT by 2020.

The IoT—an explosion of connected possibility

The IoT can also be used to offshore data processing from small, low-power embedded microprocessors to large, powerful servers connected by the Internet. Another upside to connected widgets is that, large environmental trends, such as global warming, can be measured quantitatively by a large, global array of sensors. Blitzortung, a project dedicated to mapping and measuring lightning strikes around the world, makes use of such IoT sensors.

For such IoT devices, power usage and costs are primary concerns. Raspberry Pi, made by the Raspberry Pi Foundation, and Intel Galileo board, made by the silicon giant Intel, are especially suited for making IoT devices. These feature powerful ARM and x86 processors that allow connectivity to the Internet and also handle low-level hardware peripherals, sensors and actuators that engage with the environment. Let us see how these compare.

The hardware aspect
One of the main aspects of building connected IoT widgets is power consumption, since these are always on and often do not have access to mains power. Both Raspberry Pi and the Galileo have very low power consumption, consuming around 3W each. The rest of the power goes towards powering other sensors and peripherals. Low-level I2C, UART, GPIO and SPI bus peripherals are used by the main board to communicate with other hardware.

One of the main advantages of Intel Galileo is its Arduino compatibility. The Galileo has the same pin layout as Arduino, allowing it to use a large range of Arduino shields that have been developed since the first Arduino came out in 2005. It also gives users a very large, established code base, projects and a community. A very large number of peripherals are made to be compatible with Arduino. All these factors make the Galileo a very attractive option both for hobbyists and firms wanting to get their product on the market quickly. This also gives a larger range of sensors and hardware for use in a widget.

Raspberry Pi, on the other hand, is a new entrant to the market, but has made a colossal splash in the market, getting extremely popular again with both the industrial and hobbyist crowd. It has developed a vast community, complete with compatible peripherals and code base. Though still lagging behind the Arduino family, it has emerged as a rival to the tried-and-tested Arduino. The Raspberry Pi Foundation has also encouraged the development of peripherals, such as Raspberry Pi camera module, which brings a 5MP HD camera at a price affordable for school children.

The software aspect
On the software side, the two boards are almost neck to neck. Microsoft has released a stripped-down light-weight version of Windows for Intel Galileo. Microsoft’s main goal with this push is twofold—first, to appease the growing hobbyist community as well as small and medium scale manufacturers, and second, to feed information collected by these IoT devices to Azure, its cloud service, and generate continuous revenues for the firm. Another plus-point of the Galileo is its Arduino compatibility, which means that it can run familiar Arduino codes, allowing users to port existing projects or build on thousands of open source projects found online, even though a Galileo-specific community is still in its nascent stage.

Raspberry Pi, on the other hand, leans more towards the open source side of things. It can run Linux distributions such as Debian and Fedora, along with support for Android. Since it was originally designed for use in schools, it is designed to be extremely user-friendly and can run code written in Python and Scratch. Raspberry Pi also has a burgeoning dedicated user community online, which can be very helpful for debugging and code help.

Conclusion
Convergence of the IoT, Cloud, analytics and Big Data technology is the new trend in the embedded and software industry. These technologies together can be used to harness the tremendous power of data collected from thousands of Internet-connected sensors. Products like the IBM Internet of Things, Cloud and Windows Developer Program for IoT are evidence of the fact that software giants believe in the power of IoT and are scrambling for a share of the pie. The IoT is here to stay, and Raspberry Pi and Intel Galileo are products that can be leveraged to bring connected widgets to the market faster and cheaper than ever before.

The author is a student of Class XII and has been building circuits since he was 12 years old. His interests include embedded electronic design, building robots and wireless communication. He is currently working on projects with Raspberry Pi.