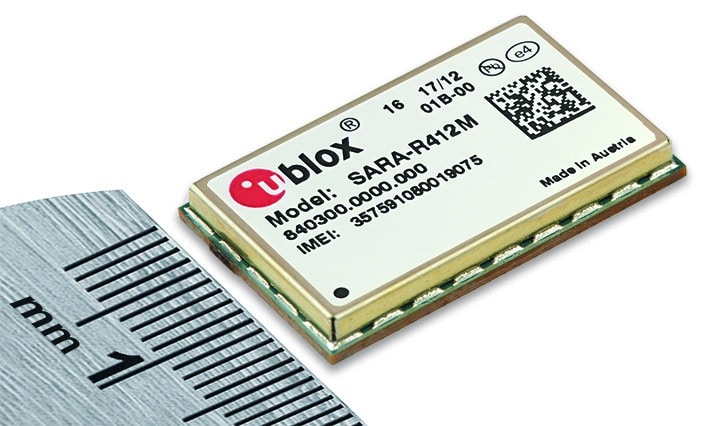 The SARA-R412M, an LTE Cat M1, NB-IoT, and quad band 2G (EGPRS) module from the house of u-blox promises worldwide coverage. Measuring just 16×26 mm, the module is the smallest to provide both LTE and quad band EGPRS support in a single design.

SARA-R412M is a feature-rich suite optimized for LPWA (low-power wide-area) IoT applications that require the assurance of 2G connectivity to guarantee broad geographic coverage. The coverage is promised even in areas where LTE Cat M1 and NB-IoT are not available yet. The flexibility extends further with dynamic system selection as Cat M1, NB-IoT, and EGPRS support in single mode or as a preferred connection that does not require a module reboot to switch between modes.

The SARA-R4 series covers a whole host of IoT applications, especially those reliant on long-term, low power use or requiring connectivity deep within buildings. From gas, water, and electricity metering, city street lighting, building automation, HVAC (heating, ventilation, and air conditioning), industrial monitoring and control, telematics, it fits well into the needs. To name some more, insurance, asset and vehicle tracking, security systems, alarm panels, outpatient monitoring, and many consumer wearables are also going to benefit from it.

It not only enables customers to easily migrate from other u-blox 2G, 3G, and 4G modules, it also strengthens u-blox’s leadership position of offering among the world’s smallest global hardware designs. New IoT devices deployed in the field today can activate on existing 2G networks and still leverage the benefits of LTE Cat M1 and NB-IoT technology once it becomes available.

Users get data integrity between applications via secure communication protocols, notably including two-way authentication between client and server, a strategy often utilized with cloud services. Critical firmware updates can be delivered with the u-blox proprietary uFOTA (firmware over the air) that allows end-users to continue using the same hardware when features and functionalities are updated. This makes the product suited for critical applications running on devices that may be deployed in the field over long periods of time.

Module’s Cat M1 connectivity reach deeper into buildings and basements, and even underground with NB-IoT when compared to other air interface technologies such as GSM or Cat 1, thanks to 3GPP Coverage Enhancement. It is expected to hit the market by end of this year.

Mobile Applications: For the IoT and Home Automation

Enabling the Internet of Things in an Automobile