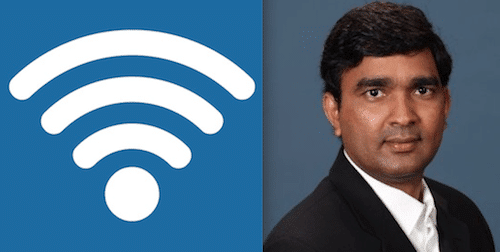 With IoT being the buzz word everywhere, umpteen choices of ultra modern wireless technologies have cropped up. How do they stand up to good-ol Wi-Fi? Venkat Mattela, Founder, Chairman and CEO, Redpine Signals, Inc speaks with Dilin Anand from EFY.

Q. What according to you is the most robust wireless technology available to engineers today?

A. When we started with nine technologies in 2002, a couple of them died a little later. Ethernet is the best proven and known networking technology but what is the equivalent of it in wireless? It’s called Wireless Local Area Network (WLAN). Other wireless technologies are not WLAN, because it is the only wireless technology developed for networking. Wi-Fi has been able to deliver good throughput at a much lower power consumption than cellular with Bluetooth being the only technology better than it.

Q. Do you think it will survive over the long term?

A. I believe that Wi-Fi is the only technology that can prevail the longest because it is the easiest and cheapest way to implement wireless technology in a device. Wi-Fi is the only tech that can give you a one dollar wireless chip and a nine micro amperes level of standby that can be used to implement the same features as any other technology. This was not something that was not possible five years ago and that is why other technologies came into the picture a few years ago. For vehicular communication 802.11p will be there, but I do not believe ZigBee to be something that will thrive in the long term. Technologies like LoRa may not survive in the long term because of throughput related problems.

Q. How has Wi-Fi evolved for autonomous cars?

A. Data could be used for critical features like collision avoidance so it cannot have the packet moving slowly. An important thing here is that the connection between the wireless on board unit and the road side unit that must be very deterministic. To achieve this, an existing wireless product won’t work. So, they came up with a new standard called 802.11p which is a modification of existing technology with a software stack that only guarantees determinism as compared to regular Wi-Fi.

A. The technology called 802.11p which is basically a V2V or V2X technology. It is a wireless technology that is used to connect a car to the road side. It functions almost like Wi-Fi connecting to an access point, with the different being that Wi-Fi is generated from a car and the access point is on the road.

Q. What are the most important things every engineer needs to know about WiFi?

A. The main challenge in Wi-Fi is latency. Wireless also has an intrinsic problem that I can block it whenever I want, no matter how good you are. On the other hand, the level of validation of wireless technologies today ensures that you can reliably use applications that consume a lot of data like a video call from a village or even from below the ground! The level of maturity and mitigation knowledge that have gone into this technology is noteworthy.

Q. Every year, every vendor comes out with a new low-power solution. Where do you think this will end, or will it?

Q. Innovation comes out of unexpected placed. Could you share with our readers on how you were able to use an unsuspecting technology for a completely unrelated application?

A. Wi-Fi itself turned out to be a great example of an unexpected technology that can be used for energy harvesting. Wi-Fi was designed for networking with plugged in devices so it is the worst candidate for energy harvesting when you look at its face value. However, we were able to do an energy harvesting project using it by choosing an application that does not require a heavy dose of data in frequent intervals.

TAITRONICS and AIoT 44th Event Edition in Taiwan in this October

Intel Plus AI: Unleashing The Experiences Of Tomorrow