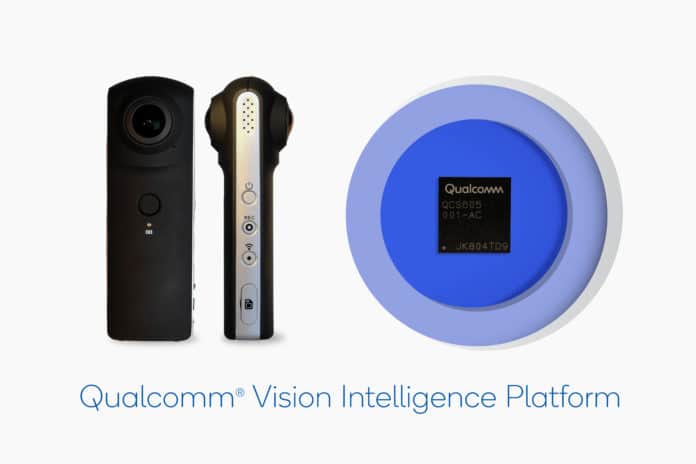 Aiming at powering devices such as 360-degree cameras, robot vacuums and smart displays, Qualcomm has launched two new system-on-chips, SoC’s. QCS605 and QCS603 are the two new chipsets unveiled.
According to media report, the new SoC’s focus on artificial intelligence (AI), power efficiency and camera processing. Qualcomm claims that their work with cameras in smartphones has helped it improve the low light performance in IoT devices. For instance, security cameras can now process noise reduction in environments with low light or even pitch dark.
The company claims that the new chipsets will enable ‘superb image quality’ thanks to the Spectra 270 ISP. In terms of connectivity options aimed at IoT devices, the new SoC’s come with 2×2 802.11ac Wi-Fi, Bluetooth 5.1 and a number of Qualcomm’s in-house audio technologies including AptX.
Qualcomm has added more imaging tricks to prevent the ‘ghost’ effect in HDR video, advanced electronic image stabilisation, dewarp, de-noise and chromatic aberration correction.
The company has added the support for AI and neural processing frameworks such as Google’s Tensorflow, Caffe, Caffe2, Android Neural Network API and even the Open Neural Network Exchange format in addition to its in-house engines.
Not only this, Qualcomm has also introduced the Vision Intelligence platform. This will make The development of dedicated applications easier for them. Basic functions such as object detection, avoidance, tracking and facial recognition are best supported by the platform.
Further, strengthening it’s commitment, they have launched an AI engine, Snapdragon Neural Processing Engine (NPE). NPE is aimed to help developers, and will improve the on-device machine learning.
In addition to this, the company has also launched SDKs (Software Development Kits) so that developers can incorporate the code for improved camera processing and computer vision in their new apps.

‘Voice and Music Over BLE’ Solution For Wearables & TV Remotes