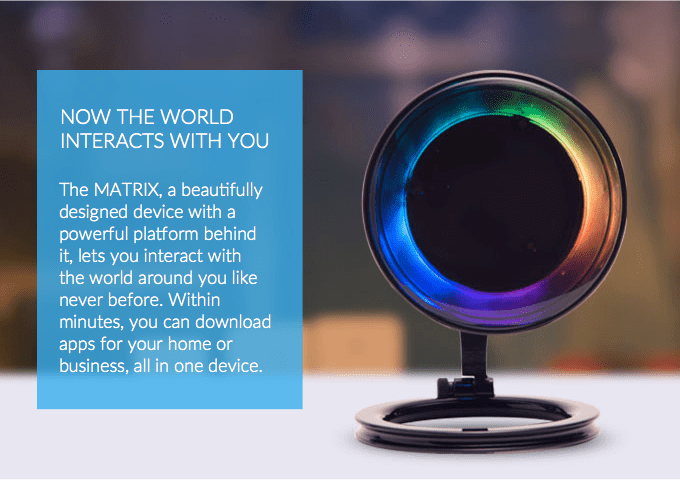 MATRIX, a sleek new device that serves as the centralized nerve center for the connected home and Internet of Things (IoT) applications, launched on Kickstarter, aiming to raise $100,000 in 30 days.
Providing the first standardized operating system for smart home automation, MATRIX enables consumers to consolidate multiple smart home applications and devices into one to reduce digital clutter, and it gives app developers a platform of pre-installed sensors, functionality and templates enabling them to launch and deploy new IoT apps with just seven lines of code and ensure compatibility across systems.

“One of the biggest challenges with the skyrocketing growth in IoT and smart home technologies is that nothing talks to each other—it’s one device to one application.” “That’s a problem because it means lots of clutter for consumers, which negates the simplicity that smart home is all about. It also forces developers to start from scratch in building new devices and apps, which costs millions of dollars and takes years, creating a huge barrier to entry, delaying time-to-market and access for consumers.” — Rodolfo Saccoman, CEO of AdMobilize

MATRIX solves those problems by bundling both an operating system and numerous devices into a single, simple device, similar to the way the smartphone consolidated the camera, calculator, computer, clock, flashlight and more. On the back-end, the MATRIX OS is like iOS or Android for the smartphone, providing the operating ecosystem that powers the user experience and serves as a programming framework for developers.

The MATRIX device is small—about 4 inches in diameter—and features an LED light ring, called everloop, for interactive response. It’s sleek, low-profile and stealthy black design enables users to choose whether to make MATRIX a focal point in their space, or to have it blend in unobtrusively. 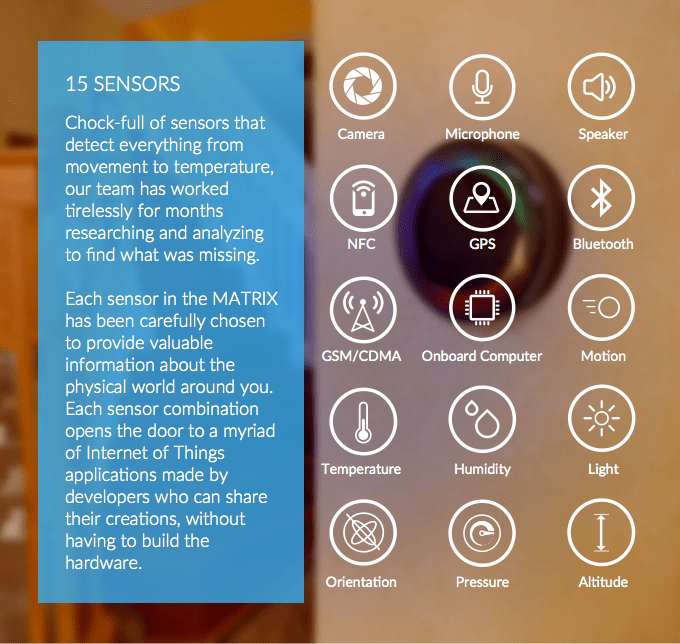 It features 15 carefully selected devices in one, including a camera, microphone and speakers, along with temperature, light and humidity sensors, plus a gyroscope, altimeter, barometer and more. It also features proprietary computer vision technology, including facial and gesture recognition with analytics to detect emotion, gender, age and more.
The concise hardware package holds the potential for millions of applications for a wide range of uses, such as:

Using MATRIX is extremely easy: users can interact with MATRIX through voice commands to control features, apps and devices and MATRIX responds with voice confirmation or visual signal from its LED light ring. A simple, web-based dashboard gives users complete visibility and control over every networked system in their connected space to manage integrated MATRIX apps and devices all in one interface, which is accessible via browser or smartphone. MATRIX comes with three amazing apps that replace most of the IoT devices being introduced to the home and multiple apps can run simultaneously, similar to the smartphone.
Beyond the smart home, MATRIX has thousands of other potential uses in business and industrial applications, including retail, gaming, entertainment, wired-farming, healthcare, transportation, smart cities, public safety, and logistics, among other key industries. For example, warehousing and logistics companies could use MATRIX to track inventory levels, to monitor the movement of merchandise, and better understand employee efficiency. Or, a public transit system could use MATRIX to identify empty seats, quickening passenger loading to stay on schedule. Any company could use MATRIX to streamline meetings— just mount MATRIX to the ceiling and it will serve as the conference phone, camera and recording system that captures meeting notes, interacts with guests, sends alerts to late invitees when other guests have assembled, and more.

For developers, the MATRIX hardware and software package provides a nearly plug-and-play system for new app deployment. All of the sensors and software templates are provided, and developers can use multiple on-board devices and sensors to power new IoT applications without having to invest in hardware. 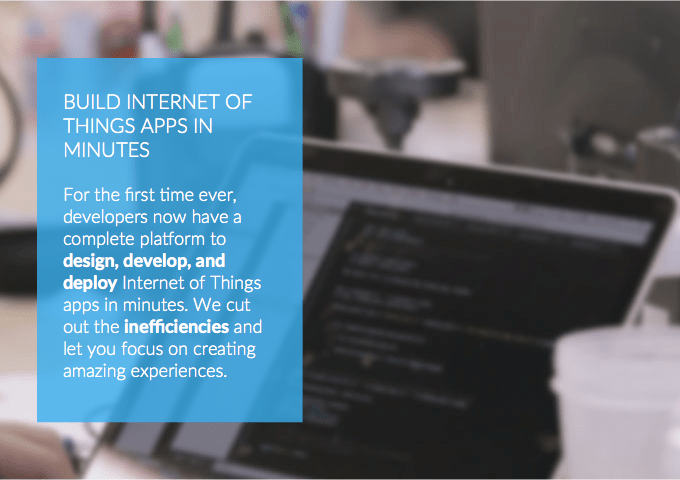 A robust software library allows developers to build new IoT applications with JavaScript using less than seven lines of custom code, enabling both advanced and novice developers to ramp up and deploy apps quickly—in minutes instead of months or years. The MATRIX runs on an open source framework, which provides maximum freedom and flexibility for developers to explore, collaborate and grow the MATRIX ecosystem and app marketplace.
“The fragmented IoT landscape is growing more fractured and complex every day. As excited as we are to provide a standardized OS to solve that problem, I think we’re most looking forward to seeing the creative things developers come up with using MATRIX as a platform for their own solutions, to make life simpler and easier for all of us,” Saccoman said.
MATRIX runs on 802.11 a/b/g/n Wi-Fi, CDMA and GSM 3G, and setup is quick and easy, taking less than five minutes. It is now available for pre-order on Kickstarter with super early bird rewards staring at $199 for one MATRIX device and early bird of $498 for two, to create a MATRIX network over a larger space.
For more information, visit MATRIX on Kickstarter bitly.com/MATRIX_kickstarter

MATRIX is the nerve center for the Internet of Things, developed by AdMobilize, the first company to create the “plug and measure” digital analytics platform for physical spaces. Based in Miami, the company is comprised of developers and tech geniuses from all over the world focused on bridging the gap between physical and digital spaces. Find out more at www.admobilize.com.

FireFox Keeps Us Guessing As It Tests Its IoT apps

The Blueprint Of Wireless Internet Of Things