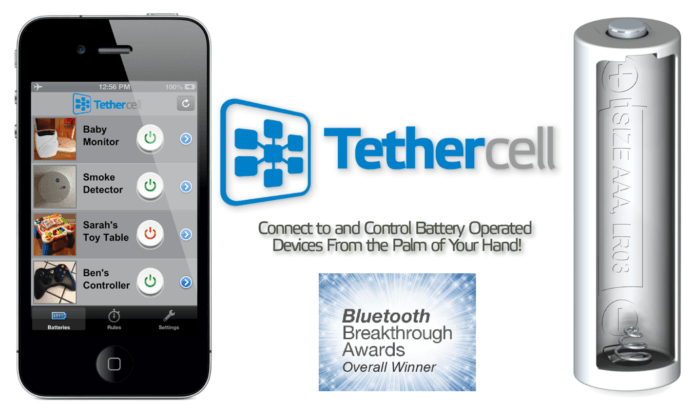 Power management solutions are all the rage. We keep hearing about controllers for air-conditioners, lighting systems, computers, and so on. But, what about smaller, battery-powered devices? Suppose I forget to turn off my radio, and want to do it through my mobile phone later. Is it possible? Yes, Tethercell is an innovative product developed by Trey Madhyastha and Kellan O’Connor, both veterans of the aerospace industry. Take the gadget you wish to control, remove one of its AA batteries and replace it with a Tethercell Adapter, which is a little app-enabled device with the same dimensions of an AA battery. You can now remotely control the gadget through an app running on your iOS or Android device. You do not need to replace all batteries on the device you wish to control, just one. Tethercell will be available commercially from June 2013.

Inside: The Tethercell contains a lot of cutting-edge electronics based upon the TI CC2540  microcontroller. It also contains a current-sensing OP-AMP comparator, temperature sensor, N-channel MOSFET (capable of switching up to 5A), 1.5 to 3V boost converter and embedded 8051 microcontroller. The device is powered by a single AAA battery. Powering the on-board Bluetooth radio consumes just around 20mA of current. However, the radio operates on a low-duty cycle, and spends most of its time in ‘sleep mode’. In cases where Tethercell is used merely for switching on or off devices, the device is able to run for approximately six to twelve months on a single AAA battery. However, when the device is configured to do more tasks and if the host device draws more power, then the battery might have to be replaced earlier. Tethercell utilises Bluetooth 4.0, the new low power Bluetooth protocol that is expected to play a huge role in the Internet of Things. It has a range of around 60 ft. indoors and 100 ft. in open grounds.

Users will be able to tailor the behaviour of their Tethercells using the Tetherboard App with simple iOS style App controls. An App Developer Kit can also be downloaded for free, to build your own applications. The device also takes care of privacy, by including password protection.