Along with Brillo, Google has also introduced Weave, a protocol to aid intercommunication between Brillo and other IoT devices. It will act as a common framework for applications to use these devices. For devices working on other OSes, a compatibility library is to be installed for interoperability. Together, Brillo and Weave aim to provide a complete platform for connected devices.

Huawei has also come up with an ecosystem for connected objects, Agile IoT, which includes a lightweight system called LiteOS, a network gateway and a dedicated controller to link the chain. This needs just 10kB, which is less than that occupied by a normal document and, hence, is correctly described as an ultra-light OS.

A standards group for the industry…

Its members include players in various industrial sectors, government and academia. IBM, Intel, General Electric, AT&T and Cisco are founding members. With 136 members as of January, the consortium is also working on developing test beds to improve quality efficiency in industrial manufacturing.

… Another for the home

Apple’s HomeKit is a framework that automates your home. It helps control multiple devices like switches, doors, thermostats and lights. Instead of handling each device independently, the idea is to integrate all of these into a centralised app that acts as the primary control, made easier with the integration of Siri with HomeKit. You can even group devices into categories that automatically start functioning together on activating a single command.

For accessing out-of-home devices, Apple television does the trick. All you need is an iPhone, iPad or iPod Touch with iOS 8.1 or above to start commanding your home smartly.

Let us not leave out…

In addition to all of these, we have OneM2M that emphasises a common service layer that can be embedded into devices, Open Mobile Alliance for developing open standards for the mobile industry and Samsung’s SmartHome concentrating on home automation.

How about a unified standard

It is well-established that the IoT is here to stay. Although everyone comes together in adopting it, opinions on the various standards are fragmented. While most people choose to go with the standard they have heard of the most, the belief is that these will slowly evolve to arrive at a unified standard. Availability of a lot of basic building blocks in terms of protocols, security and Web architecture is by itself the universal standard, says Saarnivala. The freedom to put together what you need, as and when you need them is the coming-togetherness.

There are also a few different takes. In an interview with EFY, Bipin R.R., vice president, Digital Services – IoT, Tata Elxsi, stated that a single unified standard for all IoT-related work is pretty much impossible to arrive at but, with time, we will see a unique standard for each industry vertical.

An all-embracing standard might even be undesirable, adds Woolley. According to him, the focus needs to be on ensuring that rigorous and widely-supported formal standards exist for the key technological building blocks of IoT architectures. It is also important that the standard ways of achieving interoperability between technologies and layers of the IoT architecture are defined. After all, the IoT is likely to be a highly heterogeneous world. 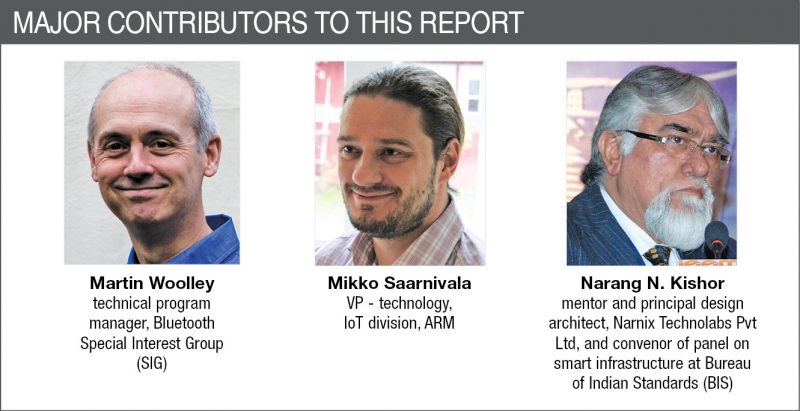 While it might not be desirable to have a number of new standards, Saarnivala feels that the trend of developing on existing, open standards is a positive change. He says that the use of open standards is obviously an extremely recommendable approach as it tends to steer the industry to a path of reduced fragmentation in standards and technology. With improvements in device management and provisioning, we see IoT systems having a level of interoperability that has never been witnessed before.

Interestingly, OIC and IIC have joined hands to work out the angle of interoperability. Thread Group and ZigBee Alliance are trying to work together to allow ZigBee’s application layer to connect with Thread network. Qualcomm becoming a member of Thread Group opens the doors to Alljoyn and Thread working together.

Efforts like these may open the path to a universal network that combines existing standards at different levels, to arrive at a comprehensive standard that all IoT devices can cater to. Only time will tell.

Tokai Rika and Alps Alpine Enters into Agreement on Joint Product Development in the...

The Next Industrial Revolution – Enabling Technologies

The “Internet of Things” is Conceptually Wrong