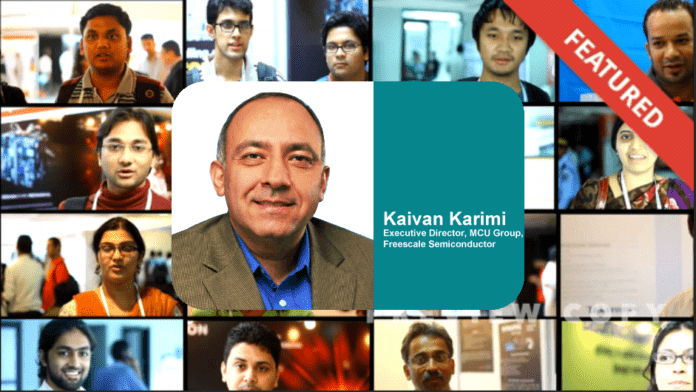 Hear what Kaivan Karimi, the Executive Director of Global Strategy and Business Development, MCUs at Freescale, has to say about Electronics Rocks 2013.

Because I am so excited about the Maker Movement, when I was contacted by the organizers of the Electronics Rocks conference, which is the premier maker show in Bangalore, India, I gladly accepted. When I presented at the eRocks 2013 show last month, more than 1300 maker enthusiasts gathered to share ideas and learn from each other. My presentation was about the one box platform (read more about one box in this blog and this blog). During the event, I shared the partnership with Oracle and ARM, and how one box brings a secure service delivery platform for IoT related applications, and is based on open standards. When I mentioned that the reason for the open platform is to promote innovations by smaller players such as the Maker Movement, the crowd who had attended my talk became excited with applause. Also, when I mentioned the role Oracle would be playing via porting Java ME to small MCUs for edge node products, and to unify IoT, again it was clear I had hit an extremely positive note for the crowd.

After my talk, a large crowd formed around me, further probing into details about our one box platform, specifically how they could get their hands on it. The level of enthusiasm for ARM and Oracle on a Freescale platform was high, and the fact that this was an IoT platform extending itself to the maker community, made it even more popular. After leaving the auditorium area and as I was walking the halls and looking at the exhibits, it was clear that ARM based platforms and tools had a special place with the maker crowd, and one could almost say that ARM was clearly at the heart of the maker movement. When I asked one of the exhibitors about his views on the maker movement, he said “ARM has democratized building hardware, with low cost and much easier to use hardware-building tools, which are more broadly distributed around the world, so now the Indian engineering community has as good a chance as any western engineering community to be a part of the IoT product development.”

At the Electronics Rocks show I also met Priya Kuber of Arduino India who showed me their latest innovation at the Arduino booth –  an electronic drum set using fresh bananas. It was sitting next to a plant that would ask you for water when it was thirsty, and thank you when you water it … now that’s fresh electronics!  By the way, that 6 months and $150K series A funding for prototype, according to a VC at the eRocks show, was around $35K and 4 months in India.

My interactions with the maker community around the world has made me realize how pervasive this movement has become, and how much it is THE key to low cost innovations that will propel the IoT market from an edge node and wearable devices perspective. It is clear to me that whether you are a fan of Adafruit’s Limor “Ladyada” Fried or not (I am a big fan!), geeks are cool again and nothing is indeed geekier or cooler than building your own unique gadgets and showing them off at a maker event!

Kaivan Karimi is Executive Director of Global Strategy and Business Development, MCUs at Freescale and can be reached atkaivan.karimi@freescale.com.

One Small Step in Data Transmission, A Giant Leap for IoT

No Flip Sides, Cause This Is IoT’s Guide To Smarter farming