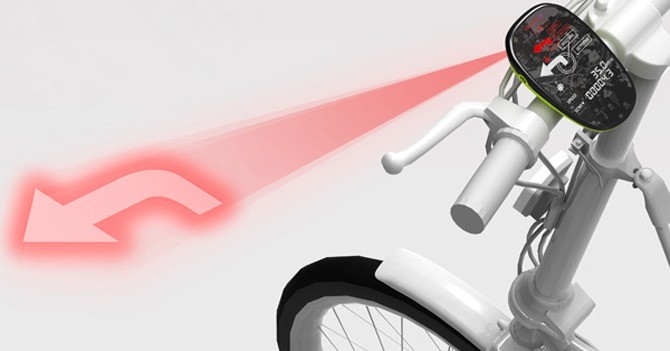 Open Sight is a navigational aid for cyclists developed by designer Kim Tae-Jin. When the designer felt that traditional GPS navigation devices are distracting—people tend to look at the device rather than the road, leading to accidents, he went about developing a navigation aid, which uses powerful directional laser arrows that are visible even during the day, to project routes and other information straight ahead of the cyclist on the road, rather than on the device. The designer is confident this will be more convenient than traditional instruments, and also avoid accidents.

Inside: At the core, Open Sight works like existing GPS devices, but includes high-intensity laser projection, which is bright enough to be seen just as well in broad daylight as in low light and at night. The projection mechanism displays the route and other information straight ahead of the cyclist, on the road. So, there is no need to keep looking into a small screen. A touch-enabled control panel allows the user to easily control the features.  Open Sight also includes a variety of sensors that measure cycling speed, distance covered, and so on. The device is pedal-powered, which means it charges using kinetic energy generated by the pedalling motion. It has an on/off switch to avoid power wastage when not in use. In short, the innovation here is the laser projection, which avoids distraction and improves safety for the cyclist. According to the designer’s experiments, it also improves visibility at night, since the laser beams provide additional light.