From fashion and passion to compassion, the wearable industry is invading all walks of life at a slow but promising pace. Kevin Curran, IEEE senior member and reader in Computer Science at the University of Ulster, talks to EFY about the impact of wearables in today’s society.

Q: How would you say the wearables industry is faring?
A: Last year, over 100 million wearables, including fitness trackers and smartwatches were sold worldwide and this 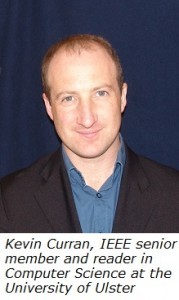 number is expected to cross 200 million in 2015.
Wearable technology has struggled to become mainstream, with few convincing use-cases and ugly designs for devices trying to replace jewellery on peoples’ wrists. Smartwatches and other wearable technologies have seen a high rate of abandonment too, with a third of the users ditching the devices within six months of trying them, according to a research by Endeavour Partners.

Q: How can this issue be set right?
A: Take watches, for example. Traditional watchmakers could add a touch of ‘smart’ to their products. The vast majority of smartwatches on the market, and to some extent even Google Glass, are bulky and look more like a piece of technology than a fashion item. That is going to change as companies focus more on design and making devices that are more discreet. A problem, at the moment, is that everything is a square touchscreen. Companies have already taken some steps to make their devices more fashionable. For instance, Pebble and Martian showed watches at the Consumer Electronics Show (CES) that look more like regular watches than smart devices.

Q: So, can we say that the situation seems to be improving?
A: This new paradigm of wearables is well-positioned for mass adoption as we see traditional personal computer sales drop 15 per cent. For instance, few could have predicted business value in Twitter or Facebook before they had mass appeal and followers. Wearable devices have the potential to be one of the most invasive technologies ever created.

Q: What does the future offer?
A: In the near future, we can expect to see watches, fitness and health bands being the leaders. We will also see new sensors that will allow devices to detect various biometrics beyond what is possible today, such as non-invasive blood chemistry smart contact lens that can detect glucose levels via tears. There will also be a market for wearables for pets such as new activity and biometrics trackers, as well as toys.

Q: How will this impact the society?
A: We can expect wearable devices such as smart glasses to lead to changes in business practices. Wearable heads-ups displays such as Glass can assist in many daily tasks and it makes the Internet more ‘portable’. There may come a time when people literally do not wish to remain ‘disconnected’ for long periods. The impact is still to be seen.

Q: Is enabling the physically-challenged being given importance?
A: Yes. Wearables will find astonishing uses in the field of disability in the future. We can expect to see more ‘cyborgs’ as a result of ubiquitous ‘wearable computing’. Wearables can create superior beings or simply restore equilibrium (healing, restoration of function) in the bodies of disabled people. Wearable technology has the power to enhance our beings. We are beginning to see some pioneering experiments with wearables but soon we can expect to see more neuro-surgical implantations of wearable devices linking our nervous system directly to embedded devices, to assist the disabled.

Q: What about wearable devices for the elderly?
A: That is another related area where we can expect wearable devices to make a significant difference. They could provide reminders for medication, easy messaging for relatives, location determination for carers, sensors to detect falls, video replays to assist with memory etc. There could be a real use for assisting people with dementia.

Q: Can you explain what makes wearable computing really useful for such special users?
A: Wearable computing facilitates a new form of human-computer interaction comprising a small body-worn computer (e.g., user-programmable device) that is always-on and always ready and accessible. The ‘always ready’ capability leads to a new form of synergy between humans and computers, characterised by long-term adaptation through constancy of the user-interface. Basically, it will extend the body of people with disabilities to enable them to live normal lives.

Q: Is the Google Glass a wearable computing device?
A: The Google Glass can be classified as a wearable computing device, as it is primarily a smart pair of glasses with an integrated heads-up display and a power source hidden inside the frame. This is one interesting wearable technology being used to assist the disabled. Google Glass is an Android-based augmented reality head-mounted display (HMD) from Google. The glasses display information in smart phone-like hands-free format and allow users to surf the Web using voice commands. Aesthetically, they have a minimalist appearance consisting mostly of an aluminium strip with two nose pads.

Q: Could you give us a picture of the impact the Google Glass could have?
A: Andy Lin from the Center for Applied Rehabilitation Technology at Rancho Los Amigos National Rehabilitation Center, used Google Glasses on a patient with muscular dystrophy. The patient has limited motor skills, uses a power wheelchair for mobility and relies on a ventilator to breathe. Google Glass enabled the patient to take photos and navigate computer menus. This gave a level of functionality not previously possible. Another patient had limited mobility, used a manual wheelchair and could not speak. With Glasses, she could use the features of the Glass such as the hands-free form factor and voice-activated commands to communicate. Google Glass enables eye controls, such as being able to wink to control, and this can do wonders for many patients. We expect to see more and more uses of Google Glass in the future for such patients.

Q: What is the one thing that has seen or will see the biggest change?
A: Self-quantification will become ever bigger, as more and more people want to basically measure their bodies — whether it is movement, sleep or meals.
The most important part is turning that data into something comprehensible that we can act upon. Most wearables pair with an application that shows your activity over time, letting you spot patterns and change what you do.

Q: Can we expect any other changes from the present trend?
A: We expect greater emphasis on aesthetics and more social interaction, e.g., a ring lights up when a loved one taps the other half of the pair. We are seeing more wrist-wrapped devices with increased processing and power, in addition to many more sensors for reading heart rate, bio data, steps taken, estimated calories burnt, quality of sleep and more.

We can expect to see more open merging of data from wearable devices in 2015. Curved screens allow us to embed mobiles in clothing, furniture, etc. There will also be other types of devices that extend the capabilities of the smart phone.

I feel that the successful wireless standards will be WI-Fi for...