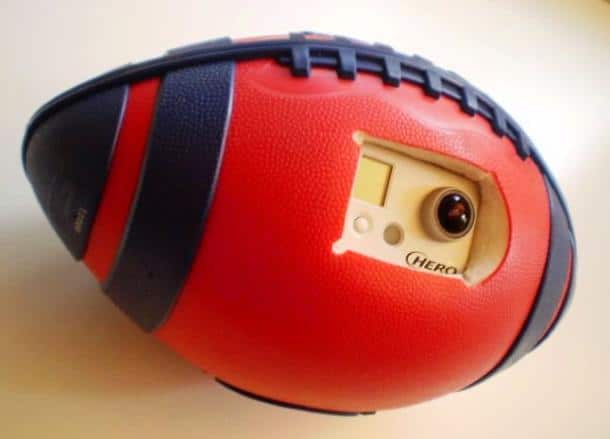 When training for football games, coaches like to watch the game from several points-of-view in order to train their players better, develop strategies and improve the moves. Cameras and image processing software have proven very helpful in this task—providing close views from multiple angles, trajectory analysis and more. However, what has been missing till date is the view from the ball! BallCam is a new technology developed by researchers at the Carnegie Mellon University and the University of Electro-Communications (UEC) in Tokyo, which allows a video camera to be embedded in a ball, thereby capturing smooth video as it spins through the air. While this might be illegal in official games, such recordings will surely be useful for training purposes. What is more, it might even vividly record the expression on a player’s face when he misses a ball!

Inside: BallCam features a high-definition, wireless GoPro HERO 2 camcorder inserted into a hole on the side of a rubber-sheathed plastic foam football. (In the future, GoPro can be used with the company’s yet-to-be-launched Wi-Fi control pack that will let the camera be controlled through smartphones.) One of the biggest problems in recording video from a spinning object as fast as a football is the resulting blur. However, BallCam uses a special algorithm to process the video from balls spinning at up to 600 rpm. The algorithm is designed to monitor and discard video frames that show only the sky. When the remaining frames are stitched together, the result is a relatively smooth, wide-angle view from the side of the football. The stitching software is similar to what NASA uses to stitch together images from its Mars rovers. So, the technology is quite complex—and certainly not ‘playful’ stuff! The researchers say that the prototype can be enhanced to include multiple cameras and better camera sensors too.

ON Semiconductor to Accelerate Edge Device Innovations for the Internet of...

“A day without connected devices is unimaginable”