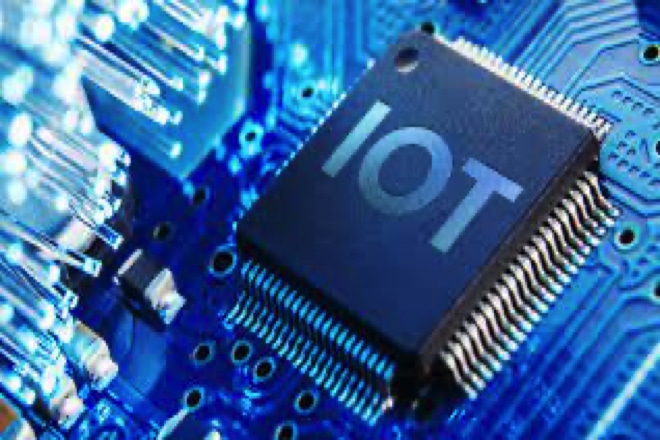 5G was the fastest growing technology YoY (+800%), followed by 4G Cat 1 (+100%). However, NB-IoT captured close to a third of the market in terms of shipments. China alone contributed nearly 85% of the total NB-IoT module shipments in this quarter and continues to be the leading geography for cellular IoT use-cases and deployments.

Fibocom was also able to increase its share in the global cellular IoT module market, cementing the second spot in our global rankings. The company saw strong demand for its 4G Cat 1 shipments during this quarter but also continued to expand its 5G modules portfolio, targeting multiple applications to closely compete with the likes of Quectel, Thales and MeiG.

Telit entered the top three rankings of cellular IoT module vendors riding on its strong performance in 4G Cat 1 and LPWA modules. Moreover, Telit launched smart modules and NB-IoT modules recently following in Chinese module players’ footsteps. These modules will give Telit a boost across North America and Europe in the coming quarters. 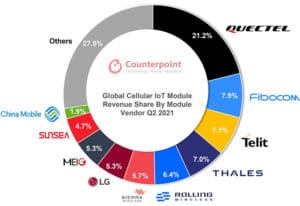 HiSilicon is the second-largest player in the cellular IoT chipset market, still holding the fort in the IoT segment. NB-IoT is contributing more than 90% of HiSilicon’s shipments. Going forward, HiSilicon is expected to surrender the NB-IoT leadership position to its homegrown competitor UNISOC.

The third-largest vendor, UNISOC, is the only one among the top five cellular IoT chipset players which grew by more than 100% YoY during the quarter. The recent module launches trend shows UNISOC is focussing more on NB-IoT and 4G Cat 1. Quectel, Neoway, Longsung and Open Luat are some notable players which launched UNISOC-based modules during this quarter. Moreover, UNISOC unveiled Release 16 supported 5G chipset platform V516 in August. It is expected to help UNISOC increase market share in 5G applications such as manufacturing, port surveillance, grid monitoring, telehealth and patient monitoring.”

Overall module ASP increased by 5% YoY due to rising 5G shipments and semiconductor shortages. The ASP for 5G modules reached sub-$150 for the first time in Q2 2021. The second half of this year will provide momentum for 5G module adoption as most of the modules will come under production by then. However, the global cellular IoT module market will be more prone to supply shortages in Q3 2021 compared to Q2 2021.