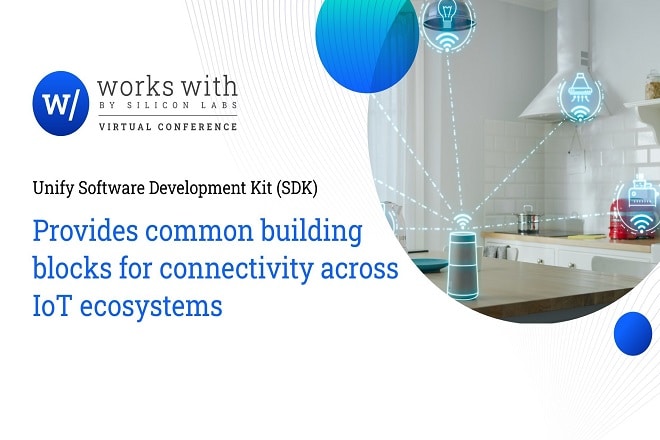 Silicon Labs has announced the availability of its Unify Software Development Kit (SDK), which provides the common building blocks for connectivity across IoT ecosystems. Now, IoT cloud and platform developers can design devices and gateways that have world-class capabilities with respect to interoperability across current and emerging wireless protocols. The Unify SDK will offer ready-made protocol-specific translations for Z-Wave and Zigbee (available today) with plans for Bluetooth, Thread, OpenSync and Matter, dramatically simplifying IoT wireless network interoperability and supporting companies as they scale smart home, city, building and industry ecosystems.

“Silicon Labs’ Unify SDK brings the industry one step closer to a world where all IoT wireless devices work together easily across industries and in the home,” said Matt Johnson, president, Silicon Labs. “With its ‘design once; support all’ capability, the Unify SDK accelerates time-to-market, streamlines maintenance and future-proofs investments by simplifying the process for updates. For the first time, IoT providers will be able to develop and maintain a single software code base for IoT devices, including gateways and easily add wireless protocol support when desired.”

The IoT market is experiencing explosive growth while grappling with a wide array of wireless protocols and more than 600 IoT platforms worldwide. The arrival of Unify SDK is well-timed.

The IoT industry is certain to approve Matter, an industry-unifying connectivity standard. In anticipation, IoT developers can use the Unify SDK to advance their products and platforms. Upon the standard’s approval, they will easily be able to perform cross-platform wireless communication with Matter devices. For example, a Zigbee-based smart speaker could perform a Unify SDK software upgrade to enable Matter, then run both protocols simultaneously, preserving existing investments and allowing for new wireless technologies. Matter is backed by Apple, Amazon, Comcast, Google, Schneider Electric and numerous other ecosystem players. The Unify SDK will help accelerate industry adoption of Matter and the subsequent scaling of IoT platforms to communicate across ecosystems and wireless protocols.

Also, on approval of Matter, more than 15 million IoT gateway products developed using Silicon Labs’ Series 1 and Series 2 wireless solutions, which are at the core of the new Unify SDK, will become Matter-compatible. Similarly, companies can choose to develop IoT products using the Silicon Labs Unify SDK for existing wireless protocols, including Zigbee and Z-Wave, and later leverage Unify SDK to easily activate Matter network communication on their product portfolios.

“The complexity of developing products for wireless connectivity may be reaching its peak. With Matter edging closer to market availability and wireless development tools becoming more protocol-neutral, we’re entering an era of simplified wireless development,” says Lee Ratliff, senior principal analyst, IoT and connectivity with Omdia. “The demand for connectivity across a wide spectrum of sectors continues to escalate rapidly. As IoT technology solutions advance, the burden on developers will decrease, and we can expect to see even better performing, more intelligent applications in the future.”

Unify SDK for Z-Wave and Zigbee is available today for download through GitHub. Bluetooth, Thread, Matter and more protocols will be added to Unify SDK throughout 2022.

“Many Operators Have Not Yet Started Down The Path Of Convergence”

AI-Based Voice Platform MiHup Secures US$ 1.7 Million In Series A...