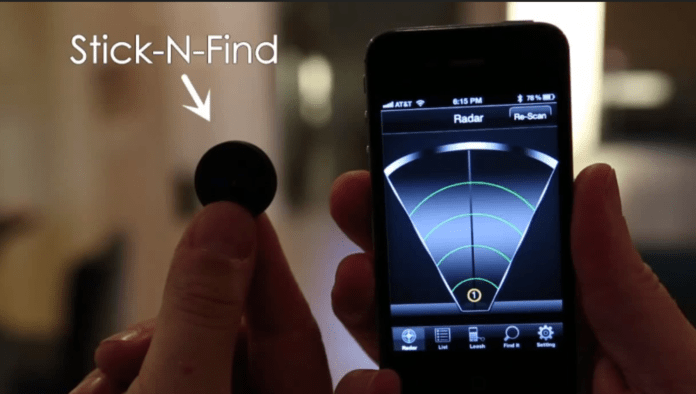 A system on a chip or system on chip is an integrated circuit that integrates all components of a computer or other electronic system into a single chip. It may contain digital, analog, mixed-signal, and often radio-frequency functions all of which would exist on a single chip substrate. A system-on-chip blurs the lines between chip design and system design.

World’s smallest Bluetooth location ‘stickers’
Ultra low power (ULP) RF specialist Nordic Semiconductor ASA announced earlier that its SoC series nRF51822 has been specified into the world’s smallest Bluetooth low energy coin-sized location stickers, ‘StickNFind’ by Stick-N-Find Technologies. StickNFinds are the size of a U.S. quarter at just 0.98-inch (24mm) in diameter and 0.16-inch (4mm) thick. Users can easily track up to twenty location stickers on a smartphone app. They can be used to track keys, remote controls, pets, and even people. Using a free smartphone app, users can locate their stickers using a ‘radar screen’, set distance alerts called ‘virtual leash’, and do much more.

StickNFind is offering developers a free software development kit (SDK) and technical support with its stickers already being developed for use in a wide range of applications including automated inventory tracking and monitoring within shops, stores, and shipping crates, plus security tracking of high value items such as precious stones and expensive tools or equipment.

The Nordic Semiconductor nRF51822
The Nordic Semiconductor nRF51822 is a multi-protocol Bluetooth low energy / 2.4GHz proprietary RF Flash-based SoC that is designed specifically to be used as a single-chip solution for a range of Bluetooth low energy and 2.4GHz proprietary designs in cost, power, and size constrained applications including PC peripherals, connected TV remote controls, sports/fitness/healthcare sensors, toys, and automation.

Key features of the IC include:
It has a 256 kB on-chip Flash and 16 kB RAM with a wide range of digital and mixed signal peripherals including SPI, 2-wire, ADC, and a quadrature decoder. The IC comes with 16 PPI channels, an on-chip LDO and an On-chip drop down DC/DC converter for 3V batteries such as coin cells. A +/- 250 ppm 32kHZ RC oscillator enables the implementation of Bluetooth low energy applications without an external 32kHz crystal thus saving cost and board space along with a 6x6mm 48-pin QFN package with up to 32 GPIOs.

The Key features of the stack include:
It has an asynchronous and event driven SVC-based API with run-time protection, GATT, GAP and L2CAP level APIs, peripheral and broadcaster roles and GATT client and server. It operates with a non-concurrent multi-protocol operation with a 2.4 GHz RF proprietary protocols while requiring less than 128 kB code space and 6 kB of RAM, leaving more that 128 kB flash and 10 kB RAM for application code. When compared to two-chip implementations using Nordic’s previous generation nRF8001 the nRF51822, running the S110 stack slashes power consumption by up to 50 per cent.