We have all seen Back to the future motion picture.  If you look closer, the part 2 of the movie series, Jenifer was asked by the police officers to program her home to switch on the lights when she would return back home. During 80’s and 90’s when this movie was released, we all would have though that the so called “smart home” concept was just a prophesy.

Prophecies of past are realities of today in the electronic world. Homes across the globe are integrating themselves to internet where systems monitor events and run their analytics in the background showing  trends that could help live better. Home automation needed human intervention, so as we thought.  In this story we are introducing a little “spin off” to automation units that are more smartphone centric from what was popularly followed and envisioned  in the “Back to the future series“.

From the makers of 1Sheeld that uses the potential of accelerometer, GPS, Bluetooth to create various shields for automation comes an Home automation kit called Togglit. Now shields are boards that can be plugged onto an  Arduino PCB. Togglit is integrating all of this into one single fully customisable home automation unit using the smartphone you own.  Controlling your door locks, light switches and power strips need not have your physical presence and thats where Togglit differentiates itself. 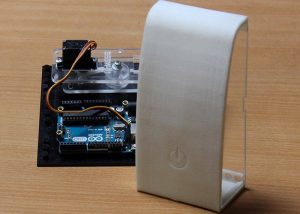 The Why’s and How’s of Togglit

The home automation market has been predicted to achieve a market value over US$10 billion by 2020. With a huge potential such as this, home automation is no longer a distant dream but an exciting reality. To sum it up all good things do begin at home.

Bootcamp 2018 for Hands-on Training on IoT