What is Cricket bowling assist? 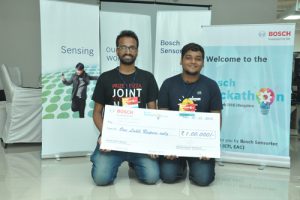 Cricket Bowling Assist is a product prototype aimed to assist bowlers while bowling in cricket matches. The development started off with a mere differentiation of an incorrect delivery from a correct one as per the guidelines issued by the ICC. But later on during the development of the prototype, we realised that the readings we collected can in fact be used for comparison to a standard set and can be effectively used to train bowlers during practice sessions so that they can give their best during the international match performances.  And we have an android application made ready which makes the module wireless, user friendly and easier to integrate with internet and make an effective IoT product wherein coaches can monitor their player’s data in real-time. Also it can be used during matches to give a feedback to the umpire for an incorrect delivery. In hardware it is a wearable consisting of two interlinked set of BOSCH BNO sensors and Arduino boards, one of which is connected to a Bluetooth module for wireless transmission of data.

What are the components that went into creating this product?

A The major components used were: two BOSCH BNO sensor modules, two Arduino Due boards and a HC05 Bluetooth module along with jumper wires to make interconnects.

What challenges did you face during the Bosch Hackathon?

A Coming on to the most challenging part, we would say that every part of the Hackathon was equally challenging starting from making the panel agree to our idea to the completion of the project. Since we were going ahead with a project idea which didn’t have any supplements available on the internet. So we had to start right from scratch analysing the problem definition to obtaining a data set based on ICC guidelines ( YouTube videos did the job of explaining the rules in depth). Moreover our product involved development of an android application and to make it user friendly. Though we can safely say that the most difficult part was obtaining the dataset which was an exhaustive (as we had to bowl some 100 times) and one of the most critical part of the product.

How does this Product measure the bowling patterns? What signatures are we looking at?

A Current regulations of the International Cricket Council (ICC) set the legal limit of 15 degrees of permissible straightening of the elbow joint for all bowlers in international cricket. This law applies between the point at which the bowling arm passes above shoulder height and the point at which the ball is released. The limit is to allow some natural flexing of the elbow joint which happens during the course of legal delivery. If the straightening is more than 15 degrees, bowler gets an unfair advantage of having more momentum generated from his/her elbow. We aimed at measuring the momentum imparted to the ball with respect to the elbow at the time of release. The challenge here was to ignore the noise in the readings due to the run-up of the bowler and to neglect the momentum being imparted from the shoulders and only consider the one from the elbow. This was done by using two Bosch BNO sensors, one at shoulder level and one at elbow level, the readings were taken from both and the necessary math was done to get the momentum only with respect to the elbow. Since it uses two such sensors and the momentum only with respect to elbow is taken, this device can be used by anyone and not just us who had trained it. If the bowling action is proper, the momentum imparted from the elbow turns out to be nearly zero. On the other hand a throwing action shows a lot of momentum with respect to the elbow. Once we got these readings we started classifying the bowling action into four categories namely: chuck, nearly chuck, about to chuck, good ball; and sent this feedback to the mobile app via Bluetooth.

Other use cases that could be created with this idea with respect to Internet of Things?

A On the similar lines, an assist can be made for some of ball related games like soccer, volleyball etc. or games like badminton where limb and joint movements are critical and a similar hardware structure can be employed to train the players for better performance. Also at the same time, this arrangement can be used in the field of medical science to monitor the joint and limb movements when it is critical, say in case of a fracture, so that the doctor has the data available to him anytime and anywhere and guide the patient accordingly.

IoT Will Change The Way Businesses Do Business