The Internet of Things (IoT) is fast making its presence felt in all walks of life—right from an operation theatre to a home theatre set-up. But with all the worry about security and power issues, no one wants their devices to be connected to everything 24/7. This story on innovation is about one such device that comes to life only when you trigger it. It wakes up from slumber, connects to the Internet, does the job assigned to it and lets you know with its multi-colour light emitting diode about the outcome. Once done, it goes back to rest. How do you trigger it? Just by pressing one button!

1btn, or One Button, as the name suggests, is a button powerful enough to trigger a multitude of actions. It could be to send an email, a text message, post a tweet or even invoke a remote server script. The latter, say the innovators, is the most powerful thing 1btn can do, as it ultimately passes on full control into your hands, a delight to hackers and makers. 1btn comes packed with tremendous potential to control anything connected to the Internet, literally!

Be at your creative best and customise your button

Have you watched the Amazon dash button advertisement? 1btn is an advanced version of the same, with extended capabilities and the first in the Indian market. A scalable and programmable version, its interface is Web based and does not rely on a smartphone, although it could work with one. 1btn can be configured multiple times in the console to make it perform different actions at different time slots.

You can now execute your plan for a king-size lifestyle. You wake up in the morning and a press of the button turns on the coffee maker and the geyser. A push in the next hour opens your garage door and locks your house safely. An action before lunch time orders your favourite dish from your daily restaurant and even calls a cab to deliver it to you.

Send out a meeting alert to everyone on the floor, get your kids to push the button to let you know they reached home safe, or even send a message to your parents to remind them to take their tablets. Use it to control your stopwatch for workouts or connect to If This Then That (IFTTT) service using Maker Channel and let it command the Internet for you. The possibilities are enormous. You just need to write your code and pressing the button kicks it off.

Why not use a smartphone instead

1btn being just a button is typically designed for a single task. It is the simplest user interface for single-repetitive-programmable tasks. When pressed, it provides immediate physical feedback and triggers immediate action. A smartphone falls short when you compare the number of steps needed to get the action running and, of course, the ease of configuration and use. Designed with simplicity in mind, One Button is the creators’ effort at bringing the IoT to mainstream users.

T. Anand, founder and CEO of Knewron Technologies, and his team of developers, talk about how they have put together the button. “The first and foremost task was to decide on the dimensions and shape of 1btn; good enough for people to use it in their daily lives and house or offices easily, without compromising on the aesthetics of their own stuff. Cramming many features and capabilities in that size was a challenge, thereafter,” Anand says.

“We learnt from competitors about issues their products have and reviews by existing users, and accordingly worked out our offerings. There were many power-saving battery-charging-related problems and, thus, it took us a while to decide on the right approach in making it work better, using lesser power,” he adds.

From pressing the button to seeing the LED glow

At the heart of the button is a Wi-Fi system on chip (SoC), ESP8266, which is a Wi-Fi module in itself and has an integrated Transmission Control Protocol/Internet Protocol (TCP/IP) stack that helps connect any microcontroller to the Wi-Fi network. Pre-programmed with attention command (AT command) set firmware, the SoC has powerful onboard processing and storage capabilities.

The very first usage of a new button demands configuration to connect to your home/office Wi-Fi. Register online, create your user account and add the device to your list. A unique MAC ID differentiates each button and you can even name it for easy recall. 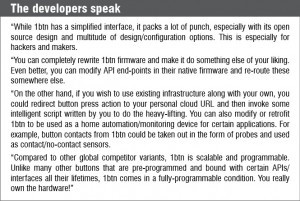 On being pressed, the button wakes up from sleep, connects to the Internet via the Wi-Fi router and sends a service request to the API. The request is then processed and a pass/fail is sent back to the button, which displays a green/red light, correspondingly. All this happens in less than seven seconds.

With a rechargeable lithium-polymer battery inside, the device can be easily charged. One charge certainly can go way beyond 350-plus presses and more, say the developers, which for a typical usage means about two months.

Launched in January 2016 at Electronics Rocks and IoTShow.in conference, the makers are offering at minimal cost and one-year-free back-end services. There is an option of using multiple buttons to work together by integrating ReST API calls into the application and accordingly programing 1btn. One can even avail only back-end services to go with one’s own 1btn via a subscription model.

The team is also working on integrating Global System for Mobile Communications and Bluetooth Low Energy into 1btn to advance its capabilities. Having come up with a beta version in just three months, 1btn is on its way to becoming a completely open source product.