We all own computers, indeed the real computers. But what if we inform you that there exists a computer that is really a computer and but termed as a “Internet computer”. Now this attracts a lot of attention as in why it is called an Internet computer. What makes it so different?

Here is that special Internet computer called “Solu”. It has been claimed to be the smallest internet computer, so tiny that it fits in your pocket. The computer has a touch screen of its own. Its also acts as your smart device. The part that makes it “The” real Internet computer is that you can bring it into office , plug on-to your monitor screen through a port on the device and voila, welcome to a Graphical user Interface (GUI) which is full blown and highly interactive. Probably this may resemble certain installed themes or skins on your smartphone’s Operating system; but believe us, that is the operating system. The Cells that you can see on the user interface can be collected into clusters, representing projects or social groups . The environments could be flipped quickly to switch to the environment user prefers.  Probably the Operating system eases the user with bulky, clumsy looking boxes and windows.

With cloud support in its background the content generated while working on Solu goes to the servers in the cloud. This ensures that data is not lost in any case. With cloud’s help the user could be less worried about backup and storage- space allocation within the computer. 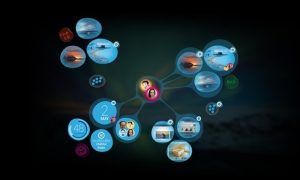 The computer also works offline. The data gets uploaded once the device connects to the internet and syncs the data for seamless accessibility. Solu’s creators can provide all the application and storage essential for a computer to work based on a minimal fee, well that is about the money part.

Leaving more room for scepticism, we think the operating system is customised. Solu’s app library is developed in HTML5 technology and is compatible with Android apps. Watch the video to know more!

Editor Team - February 26, 2021
Siemens, IBM (NYSE: IBM) and Red Hat today announced a new collaboration that will use a hybrid cloud designed to deliver an open,...

Editor Team - February 26, 2021
The institute will combine its unique expertise and Deloitte's depth of applied AI knowledge with The House Fund's network of Berkeley investors, entrepreneurs...

Tata Communications Teams Up With Google Cloud In India

Editor Team - February 16, 2021
They said that the partnership between Tata Communications and Google Cloud India will enable organisations to deploy and access Google Cloud services through...

Global Telecom Forms Board of Directors