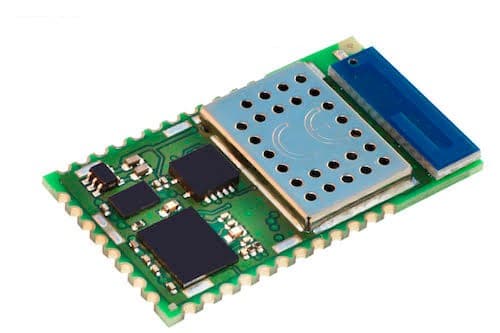 April 21, 2017 – The latest Cloud-compatible Wi-Fi module from STMicroelectronics is set to accelerate development of all kinds of IoT and M2M devices. The new module provides advanced Internet-security and application protocols, and features a microcontroller capable of supporting operation in standalone or serial-to-Wi-Fi modes.

The SPWF04 Wi-Fi module integrates an ARM® Cortex®-M4 STM32 microcontroller with a rich set of multi-functional GPIOs and with 2MB on-chip Flash and 256Kbyte RAM for generous code and data storage. Further extra features include a hardware cryptographic accelerator and an SPI port for faster host communications. In addition, the new MicroPython scripting engine dramatically simplifies development of custom applications to run directly on the module in standalone mode. Host interactions can use AT commands via a UART, compatible with the previous generation of Wi-Fi modules, or equivalent proprietary protocol over SPI. 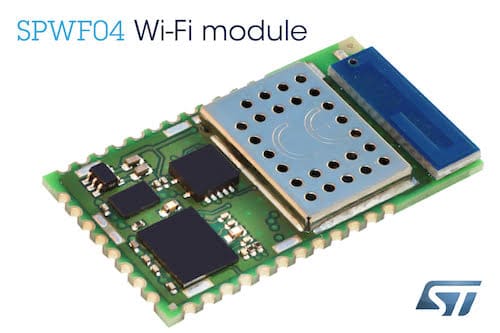 Support for strong internet-security protocols includes WPA2-Enterprise, which enables enhanced authentication and access control in large networks, and Wireless Protected Setup (WPS) that helps safely connect devices like printers or embedded systems. There is also support for advanced HTTPS and encryption protocols including Transport Layer Security (TLS), as well as Secured Over-The-Air (OTA) updates for applying software, firmware, or Flash file-system upgrades in the field via the Wi-Fi connection.

Versatile operating modes simplify integration with existing network infrastructure, using the module in Station mode, or setting up direct point-to-point connections using the module in MiniAP mode as an access point for other devices (up to five stations). The SPWF04 also comes with an extensive socket layer, capable of managing up to eight socket clients or two socket servers simultaneously handling up to eight clients each, or two WebSocket clients.

Like its predecessor, the SPWF04 benefits from high RF output power and receiver sensitivity, ensuring reliable communication even in harsh environments. Furthermore, the new module delivers its extra performance and versatility within tight size and power constraints: it measures just 26.92mm x 15.24mm x 2.35mm, and draws as little as 40µA in standby and 5mA in idle connected (DTIM=1) mode.

The SPWF04 is available in two versions, with a highly efficient ISM-band antenna (SPWF04SA), or with a built-in U.FL connector for attaching an external antenna (SPWF04SC). Modules are FCC (US), CE (EU) and IC (Industry Canada) certified, and RoHS compliant, thereby helping to streamline mandatory end-product approvals.

Conference Talk: How To Build A Device That Keeps The Doctor...

Telit’s Pan-European Communication Services Can Now Be Employed As A Separate...