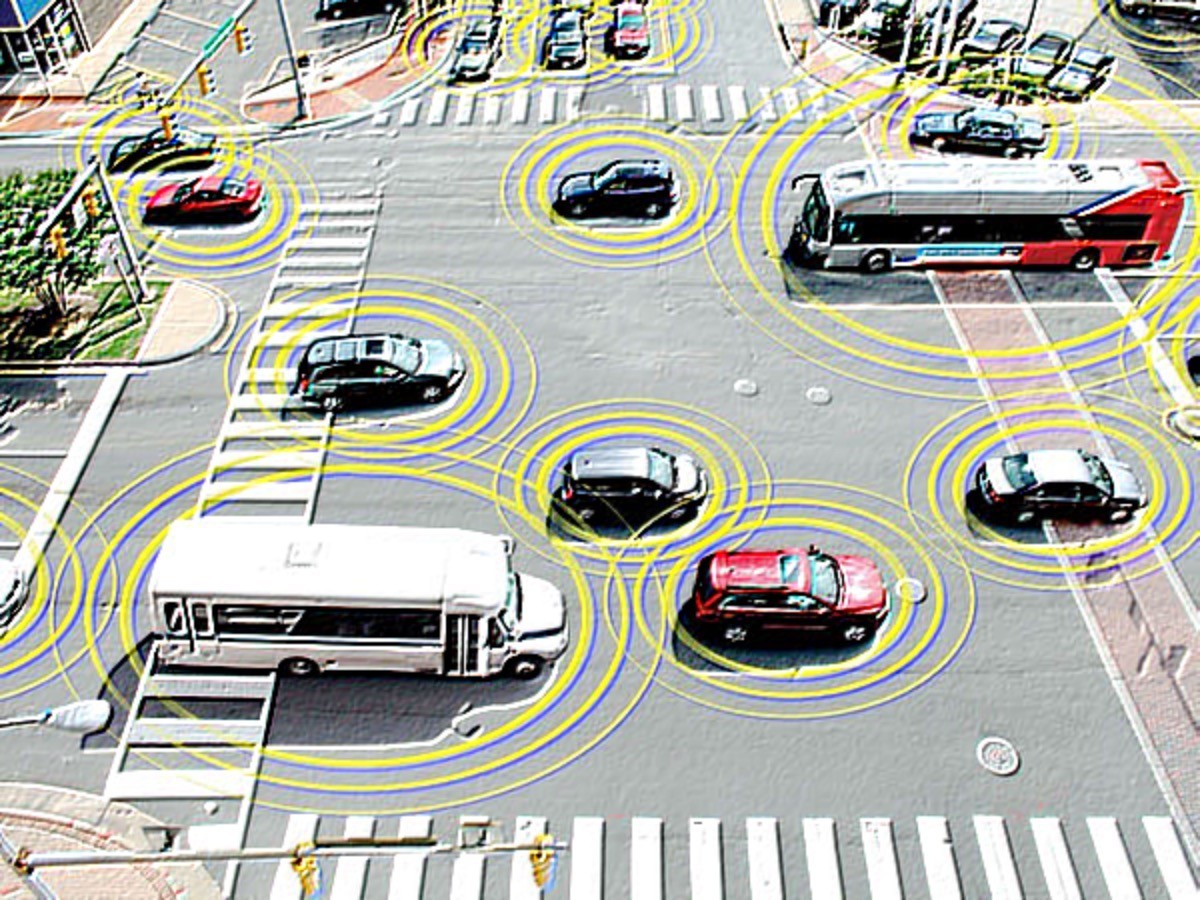 The car woke from its nap and drove over to where they were waiting. As they approached, a female’s voice rang out from the car to say, “Please go ahead,” letting them know that it was safe to pass in front of the car. Using sensors, the car had detected that there were others nearby and automatically started slowly opening the car’s four bay doors…

Sounds futuristic? Of course it does. But what you just read was what had been experienced by the very fortunate Verne Kopytoff of Fortune.com, as he took a ride in the Mercedes-Benz F 105 autonomous car earlier this year.

A world with vehicles as intelligent as those in the Disney movie Cars (where the dialogue in the title was heard), would truly be a wonderful place to live in, but there is quite some distance to go. As kids on a family trip would say, “Are we there yet?”

Your Car is your new gadget

The colossal power of the Internet is now within your car’s grasp.

Android Auto is a telematics standard that allows you to connect your car to an Android operating system (OS) on your phone or tablet. Hyundai had demonstrated this on a Sonata car at CES 2015 earlier this year, but the bigger news is that Google has recently released the Application Program Interface (API). This has triggered the race among app makers to begin creating apps for your car.

Apart from minor things like using Whatsapp through your car, Android Auto should allow you to control your phone and car functionality through the now familiar, “Ok, Google…” command. Google touts In-Vehicle messaging as one of the features but is that really a smart move for the driver?

On the other hand, Apple has its CarPlay that was also featured in Hyundai’s Sonata. However, since the API has not been made public as yet by Apple, there’s not much to do for it right now. This also means that there will be limited apps upon launch.

Of course Auto and CarPlay are just how regular consumer electronics firms look at this emerging space.

Car manufacturers like Chevrolet and GMC have their own elaborate systems, which include features such as over the air (OTA) updates for your car just like your smartphone can do now! This means new engine management functions and security features would be just a download away. These software updates in cars even add features like automatic emergency braking and blind spot warning.

What’s more interesting is that in some cars like the Tesla, these software updates can increase the acceleration, economy, or top speed of your car after it gets installed! Expect a day in the future where you can buy car performance upgrades through app-like downloads, instead of going to the workshop to get your engine modified.

Our own desi company, Mahindra Reva Electric Vehicles (MREV), has an amazingly connected electric car in the guise of the e2o. Users are able to control various elements in their car through a smartphone from anywhere in the world – from turning on the AC to pre-cool the car before you take your family out on a hot summer afternoon, to remotely locking the car and even charging the car. An interesting feature is ‘REVive’, which enables the driver to use his smartphone to activate an additional reserve of 8 kilometres of range if the car ran out of power.

Chevrolet is believed to be planning to use its on-board 4G LTE Wi-Fi and OnStar RemoteLink smartphone app to alert owners if their car is about to breakdown.

Another example is when the National Highway Traffic Safety Administration made two recall announcements. While this normally require owners to bring in their cars to get it fixed, Tesla was able to solve the problem via a simple software update.

Cars can now speak with each other

Perhaps the first bit towards a world with friendlier cars would be when they can start speaking with each other.

Major firms are already running with the idea. GMC already has plans to begin installing vehicle-to-vehicle (V2V) communication in every GMC car. Nokia announced a USD 100 million Connected Car fund in May 2015, to drive innovation in connected and intelligent cars. The month of May also saw the United States transportation secretary make an announcement that a mandate proposing all new cars and trucks to have V2V communication equipment will be proposed to the government earlier than expected.

Back in 2006, Vehicle-to-vehicle and vehicle-to-infrastructure communication using Dedicated Short Range Communications (DSRC) based on wireless, Local Area Network (WLAN) technology were tested by what was known as the Vehicle Infrastructure Integration (VII) initiative.

The Federal Communications Commission has dedicated the 5.9 GHz frequency band for automotive communications between vehicles and roadside units (RSU). IEEE 802.11p is a standard to add wireless access in vehicular environments (WAVE), thus enabling the support of Intelligent Transportation Systems (ITS) applications. The IEEE 802.11p is an amendment to IEEE 802.11, which is the same as the WiFi we all use in our homes and phones today.

“V2V communications is still not main-stream with IoT since many car manufacturers are contemplating on risks associated with it. However, some of the car manufacturers such as Volkswagen and Audi are working on V2V features for their own cars; such that one Volkswagen may not talk to all cars around it but all Volkswagen around it. For all cars to talk to each other, either single protocol or language has to be agreed upon (which is another debate topic for all things in IoT), or alternatively, all the communication must pass through a broker or translator which will then make cars another thing in IoT,” explains T. Anand, managing director of Knewron.

They could gossip with each other too

These connected cars could very well do the automotive flavour of gossip. Meaning that they would be constantly swapping pretty much basic and minor data that would become useful when a related event occurs while at the same time giving us an idea of how vehicles in the vicinity are behaving.

Sensors are a very big part of this game. An example is a sensor network across roads, somewhat similar to the ones surrounding some secure areas of Area-51, which detects motion along the area. In our case, it could be used to detect animals crossing the road and alert incoming cars to slow down accordingly. Now if a vehicle brakes hard, then it can use it’s V2V network to alert other cars in the same lane to slow down urgently – technology like this could go a long way in preventing pile ups.

Traffic re-routing and avoiding congestion on the road are other benefits with technology like this. Currently, smartphone users are able to detect congestion along a stretch of road by using applications like Google Maps. Dynamic traffic Assignment (DTA) algorithms are examples of technology that could enable people to reduce travel time. However, it lacks scalability and robustness and requires higher computation time. The INVENT team also proposed road based vehicular traffic (RBVT) routing, which uses real-time traffic data from vehicles and road-side sensors like the ones mentioned earlier.

Interference in the spectrum

Scott Belcher, the chief operating officer of the advocacy group Intelligent Transportation Society of America, stated in a news report on the Voice of America that, “If somehow we are sharing this spectrum and there’s interference, then a car that could have prevented the crash would not be able to prevent the crash because someone else is using the spectrum.”

Global Automakers, an automotive industry group is also working to solve the problem of interference by devices that want to use the unlicensed Wi-Fi spectrum currently dedicated to V2V communication. Cisco Systems has developed a possible way for the different industries to share the airwaves without such interference, according to a statement from the Alliance of Automobile Manufacturers. It is currently in testing as per reports.

New technology could also alert drivers when it is time to turn left on a highway exit ramp. Now this sounds pretty mundane, and not really a need for most drivers. However, statistics say otherwise. Unsafe left turns account for more than seven per cent of all car collisions according to an article in the Washington Post!

Car manufacturers like Chevrolet are believed to be planning to use their on-board 4G LTE Wi-Fi and OnStar RemoteLink smartphone app to alert owners if their car is about to breakdown. The device can also aid in scheduling a check-up at the dealer to prevent the driver from getting stranded on the road. The IMPACT lab at Arizona State University have been developing formal framework for developing criticality-aware software for CPS. Such framework is a promising solution to develop criticality-aware future automotive CPS to save numerous lives.

IoT To Advance the Hospitality Segment

Control Your Appliances with Voice