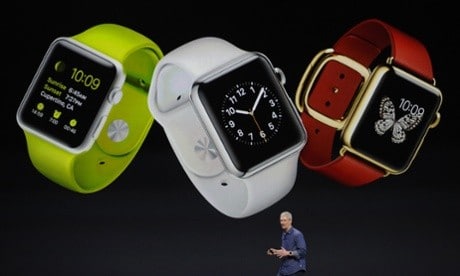 ‘Apple’ it’s a supreme brand name. They are always invincible, where every company is announcing for their product launch, but for Apple it’s like platform launch. It makes another omnipotent level.

On 9th of September for the first time Apple announced  a watch which will power Internet of things. It will come in three flavors: standard, sporty and fancy. Where iPhone is like in $199 or $299, this watch’s pricing starts at $349 and it will hit the market 2015. So, we all have to wait.

As usual this watch is also like apple’s typical product. While the world is scratching their head for the hidden code, the answer is “Apple’s most personal device ever.”

Except when it is charging, this device will acquire the personal context from the wearer as it is on their skin. And also this watch will understand you authenticating via skin contact, track you via iPhone’s GPS, how you are feeling via apple body monitoring technology and also what are doing via gyroscope, accelerometer and apps. And via this  it will make the most personal and powerful computer ever because it will understand more about your context and how to meet your needs than any other computers.

Except these special features this watch has a cloud of apps which are already on your iPhone, simply works like it will show your messages and all that.

Watch and IOT
The idea here is not just the watch, it’s also the internet of things. This is the next era of computing and here all objects will be online and ready to serve you everything you want automatically. It will understand watch and everything of your needs, including that brain can’t recognize that and it will massage the programmable world to address them automatically.

Apple is arguably the best, golden dragon of the earth, sitting alone on mountains of gold coins, breathing fire, daring anyone to take them on. But a few have noticed a small bare spot on Apple’s left breast.A chink in the armor one might say. One that is nearest the company’s heart. A flaw that was revealed with the announcement of their Apple Watch, and the company’s Internet of Things strategy. The actual chink is clearly the lack of Steve Job’s style logic, strategy of how Apple watch fits into the world and that is really depressing. And another big fault is unspecified battery life.

Keep Calm and Bring Your Own IoT Device

Connected Products of Internet of Things