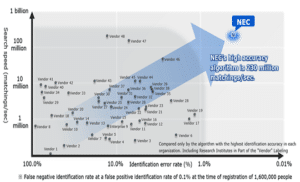 NEC Corporation has announced that its face recognition technology achieved the highest matching accuracy in the Face Recognition Vendor Test (FRVT) 2018 performed by the US. National Institute of Standards and Technology (NIST), with an error rate of 0.5% when registering 12 million people. NEC’s technology ranked No. 1 in NIST testing for the fifth time, following its top placement in the face recognition testing for video in 2017.

49 organizations, including companies from the United States, China, Russia, Europe, and Japan, participated in the NIST’s FRVT 2018, where the evaluation of face recognition accuracy was performed. These tests are the most rigorous and fair benchmarks implemented by the NIST as each organization is required to submit and be evaluated on programs that were developed during the same period.

By performing multi-stage matching, a search speed of 230 million matchings per second was achieved. Furthermore, NEC accurately matched images of a subject taken over a 10 year interval with an error rate that was 4 times lower than the runner-up.

He added, “These technologies create new value by sharing information on the status of communities, things, and processes across the entire value chain, and are a meaningful source of growth in our Mid-term Management Plan 2020 and ‘NEC Safer Cities’, which support the realization of safe, secure, efficient, and equal cities.”

Specifically, the use of face recognition technology is rapidly expanding across a wide range of fields throughout the world. Face recognition technologies are now being used in areas that require high reliability, convenience and long-term use, such as identity verification and national infrastructure, transaction settlements, bank account establishment, and passport verification.

Going forward, NEC aims to further expand the scope of this technology’s application to include store transaction settlements, services in public facilities, such as buses, railways, airports, city offices, hospitals and helping to protect and care for children and the elderly.

Based on the NEC Group AI and Human Rights Principles established in April of this year, NEC gives priority to the consideration of privacy and respect for human rights when using AI and biometric data. NEC also aims to contribute to further improvements in the usability of biometric identification and video analytics technology, including face recognition.

An Exciting Proposition By Vodafone Ireland For The Growth Of IoT