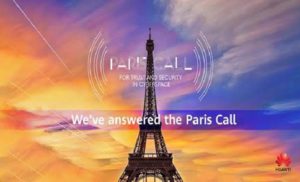 In becoming a Paris Call member, Huawei joins 564 other entities who have made a public commitment to strengthening the security of digital products and digital systems. The group’s members include 67 states, 139 international and civil society organizations and 358 private-sector companies.

“The quest for better security serves as the foundation of our existence,” said John Suffolk, Global Cyber Security & Privacy Officer at Huawei.

“We fully support any endeavour, idea or suggestion that can enhance the resilience and security of products and services for Governments, customers and their customers. We support global collaborative action on improving defences against cybercrime, including openness, transparency and internationally agreed standards,” he added.

Role as a Paris Call member

As a member of the Paris Call, Huawei will advocate for the universal adoption of objective testing and verification standards for all technology vendors. “By relying on objective third-party standards to test the security of technology made by any vendor, we can ensure that decisions about security are based on facts, rather than emotions or political rhetoric,” Suffolk asserted.

In addition, Huawei will work with governments, other private companies and civil society to promote capacity-building measures that make the digital world more secure.

Launched by the French government in November 2018, the Paris Call is a declaration of commitment to work collaboratively on one of the world’s most challenging issues. Members work together to make digital products more secure, strengthen collective defences against cybercrime, and promote cooperation among stakeholders across national borders.

They also pledge adherence to international norms of responsible behaviour in cyber space.

AI Will Not Be Used In Decison-Making In Courts: CJI Sharad...