Choose unframed or “cut” stencil while doing prototyping, it is cheaper and can be shipped easily as compared to framed stencils. 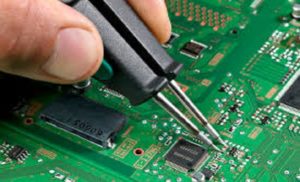 To ensure that an idea of a product is workable, it is very important for a developer to go through prototyping. However, prototyping involves several challenges such as:

Use of pre-built modules (e.g. IoT hardware) can make prototyping less complex if your aim is limited to proving the concept or idea. But if you want to go to the next stage, designing your own PCB with SMT components so as to move towards the actual product, you will need to grapple with the issue of SMT prototyping.

Surface-mount technology (SMT) is a method for producing electronic circuits in which the components are mounted or placed directly onto the surface of printed circuit boards (PCBs). (definition by Wikipedia)

SMT mayhem refers to the errors that may occur while trying to solder an SMT component with the help of soldering iron. Due to SMT’s small size, precise soldering is required.

SMT assembly with tweezers and soldering tools is not easy as pie but far from it. The manual skills and steady hand are not easy to come by.

There are two approaches to prototyping:

Sometimes, one may have to go through several rounds of prototyping and rework on the above activities. i.e.

Some of the above processes could take a lot of time, and thereby increasing the product’s time to market. These are the bottlenecks in the process of prototyping. It is critical to have fast turn-around in prototyping. Cycle time can make it or break it. Therefore, the iterative process should be lessened as much as possible.

It can be divided into three stages. The first stage is as follows:

The second stage is as follows:

The third stage is as follows:

Make sure to follow the below methods at an early stage of prototyping.

SMT prototyping can be challenging. So, build in-house assembling capability to cut cycle-time/cost, use DFP (Design For Prototyping) guidelines and deploy appropriate equipment and process.

This content is an extract from a speech presented by Ajith Narayanan, Co-founder of Zoid Labs, at IOTSHOW.IN 2019. Narayanan has several decades of experience in R&D and product development involving electronics, embedded systems and systems software.

Earlier he had worked with HCL R&D and C-DOT in India, as well as in Europe and Singapore, with multinational companies including Xerox, Digital Equipment and IBM.