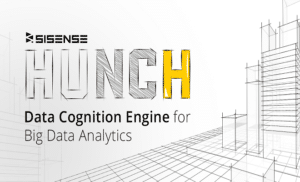 Sisense Hunch is an engine which can learn massive datasets and can produce analytical responses in microsecond to queries that are 99 percent accurate or better. And in the process responding to the queries, the engine will take tiny fraction of the cost and storage footprint.

Hunch is an engine with new class of big data analytics, data cognition and it can be applied to a number of innovative applications, that were earlier impossible because of cost and latency.
Hunch engine keep billions of rows of data in a small, portable, cost-effective IoT package in a powerful way. These IoT packages could turn sensors, phones and wearables into supercomputers.

Presently, Sisense Hunch is in testing mode with multiple Sisense clients, and has been used to streamline efficiencies around quality control at a production facility of a publicly listed electronics manufacturer. Before this engine, obtaining big data insights through high performance databases was slow and costly, so they were restricting many big opportunities to most business users and processes. With Sisense Hunch, massive stores of data are transformed into mere megabytes allowing for microsecond response times and the ability to be placed anywhere, even inside a tiny IoT device.

“Sisense Hunch represents a paradigm shift in how to extract insights from outrageously large data sets. Instead of investing huge amounts of money and effort in an attempt to process big data queries faster, Sisense Hunch condenses immense volumes of data into lightweight neural networks ‘brains’ for quick and easy analysis. These ‘brains’ decipher the patterns hidden in the data, perceiving its deep embedded structure. This means that business users can easily access big data insights, and then these insights can be made available through a host of IoT devices which are available today.”Dr. Guy Levy-Yurista, Vice President of Strategic Growth and Innovation at Sisense, and one of the inventors of the technology