Financial terms of the deal weren’t disclosed, but iRobot said it has already added the startup’s eponymous $199 Root coding robot to its product lineup.

Originated as a research project at Harvard’s Wyss Institute, Root is an educational robot that uniquely teaches coding and 21st century problem-solving skills to children as young as four years old.

In a statement, iRobot noted that the acquisition will help it “diversify its educational robot product offerings, further demonstrating its commitment to make robotic technology more accessible to educators, students and parents.”

“The acquisition of Root Robotics allows iRobot to broaden the impact of its STEM efforts with a commercially available, educational robotic platform already being used by educators, students and parents,” said Colin Angle, chairman and CEO of iRobot. 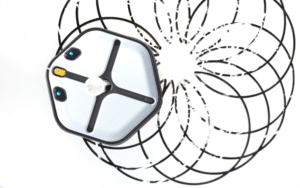 The Root coding robot is a two-wheeled, mobile platform. The robot operates on flat surfaces at home, like tables, floors, and countertops and vertical surfaces in a classroom, like a magnetic whiteboard. When paired with the companion mobile application, users can instruct Root to draw artwork, scan colours, play music, respond to touch and sound, climb whiteboard walls and explore the fundamentals of robotics. Root uses three levels of coding language, from simple graphical blocks for young children to full text coding for more advanced users.

The Root coding robot is currently available for purchase on iRobot’s website for $199.

“The Root coding robot is an incredibly powerful tool for learning to code because it intuitively scales to users’ abilities,” he said.

“A four-year-old can begin coding Root using simple pictures and symbols that translate to robot actions. Once a child has mastered graphical coding, they can seamlessly toggle to the next two levels, which introduce hybrid coding, followed by full text coding. This scalable approach is what has been missing from other educational coding robots,” he added.

However, the acquisition of Root Robotics is not expected to contribute materially to iRobot’s 2019 financial performance.

Editor Team - January 15, 2021
Financial details were not disclosed Taos is one of the largest multi-cloud consulting and managed services firms in North America IBM has announced an...

Editor Team - January 14, 2021
It has also been selected to provide actionable, prescriptive insights by tracking dynamic interdependencies and predicting service disruptions before they ever occur Zenoss...

Editor Team - January 14, 2021
He has over 30 years of experience in business development, executive level sales and marketing for high growth technology organisations Waylay’s US customers...