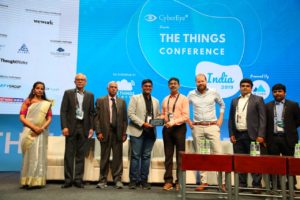 Recently, the Things Conference India 2019, Asia’s Largest LoRaWAN conference was held in Hyderabad. The experts from organisations including ISRO, Microchip, MultiTech, ARM, The Things Industries came together to discuss the potential possibilities with IoT & LoRaWAN.

“LoRaWAN has all the right ingredients required for the Indian scenario – affordability, low power and long-range. With LoRaWAN, we believe, the smart nation is near to reality,” said Ram Ganesh, CEO of CyberEye.

He added, “Through this conference, we aim to strengthen the advanced technology ecosystem and encourage innovations. Our focus is to enable individuals, businesses and governments to create and implement smart and secure solutions — this brings phase-shift in India and creates immense opportunities.”

“The Government of Telangana has been actively adapting IoT and the 100 smart cities initiative is one such example. When IoT becomes mainstream, it will be a gamechanger for not only enhancing the economy but also the lives of people,” said Jayesh Ranjan, principal secretary, I&C, ITE&C Depts, the government of Telangana.

He added, “Pilots in Telangana have seen tremendous results in many sectors including power-saving, healthcare, weather-monitoring. LoRaWAN plays a crucial role in making IoT sustainable and affordable.”

“We’re in India for the second time and it’s great to see the entrepreneurial energy and high technological competence spreading across the region. It’s an honor to see individuals and companies embracing LoRaWAN and building solutions to drive business value,” said Wienke Giezeman, the founder and CEO of ‘The Things Network’.

He added, “The Things Network is an open network to build IoT applications. It is becoming a global movement with more than 100,000 developers and many companies aggressively adopting LoRaWAN technology. Thank you iB Hubs, CyberEye and the state of Telangana for actively spreading the technology for a smarter future.”

“We want to see India as a global leader in Industry 4.0 technologies. To foster the adoption of Industry 4.0 worldwide and bring advanced technologies to India, we are very proud to announce iB Hubs Global Tech Valley – The World’s largest Upskilling Centre – our 1130 acre campus in California, USA,” said Kavya, CEO of iB Hubs.

APAC Internet of Things (IoT) to Reach a Market Size of...

Here’s How You Can Get Noticed In The IoT Jungle!