The Internet of Things (IoT) is now globally proliferating to intelligently connect devices in order to meet increasing consumer demands as well as improve productivity. IoT further helps to increase the accuracy of data-based forecasts and trends.

From home to industrial applications, the deployment of Internet of things (IoT) systems is globally proliferating to intelligently connect devices and gaining useful information in an attempt to meet increasing consumer demands as well as improve productivity. As the total number of connected sensors increases, so do the data points, thereby increasing the accuracy of data-based forecasts and trends.

This requires consistent and ubiquitous coverage to reach even the remotest assets so that every business gets a reliable IoT connectivity service. For this, satellites are a suitable option to connect sensors and IoT devices to the cloud and communicate even in harsh weather conditions (via L-band).

Unlike most of the present terrestrial infrastructure options that are complex, satellite connectivity enhances coverage in areas with limited or no cellular and Wi-Fi connectivity along with easier device management via an IoT connectivity platform. For example, Iridium Edge is a satellite IoT communications device that can be rapidly deployed and complements terrestrial based solutions. The company’s satellite cloud-based solution CloudConnect offers global IoT coverage through Amazon Web Services (AWS) and is a singular communications platform to manage connected devices.

In direct configuration mode, satellite connectivity can either be used only when necessary in conjunction with terrestrial IoT access networks (like cellular, LPWAN), or be solely used where it is the only possible means of connectivity for transmitting data. Hybrid terrestrial satellite systems result in lower cost due to terrestrial-only IoT devices, while satellite-connected terminals ensure coverage. Myriota is one such startup that provides direct satellite connectivity for IoT uses, for purposes like environment monitoring. Its advantages include security and scalability.

For sensors and devices that do not use much data, a direct satellite connection can be expensive in terms of equipment and power consumption. In backhaul configuration, satellite connects to a tower which then connects to devices via other suitable wireless communication technologies.

Since the deployment needs to be done in areas that are off-grid or have an unreliable power supply, the service needs to be designed for low power operation so that renewable energies like solar can suffice. The deployment should be preferably flexible enough to match hybrid connectivity needs. Apart from this, maintenance can be made easy with over-the-air (OTA) firmware upgrades.

Low Earth orbit (LEO) maintains low power consumption and is a cost-effective option. It is also well-suited to narrowband requirements of IoT but needs steerable antennas due to moving satellites. On the other hand, geostationary orbit (GEO) satellites need large terminal antennas and sufficient directivity to prevent interference with satellites in their vicinity.

This opens a plethora of opportunities for satellite operators like deploying new LEO or HEO (highly elliptical orbit) constellations and selling additional capacity in different bands (like C, Ku, Ka). For instance, Inmarsat, a satellite communications provider has collaborated with Vodafone IoT, doing away with the complexity of handling multiple connectivity providers and roaming agreements.

infrastructure and construction, telecom, and more. The efficient use of energy also drives the development of sustainable cities. 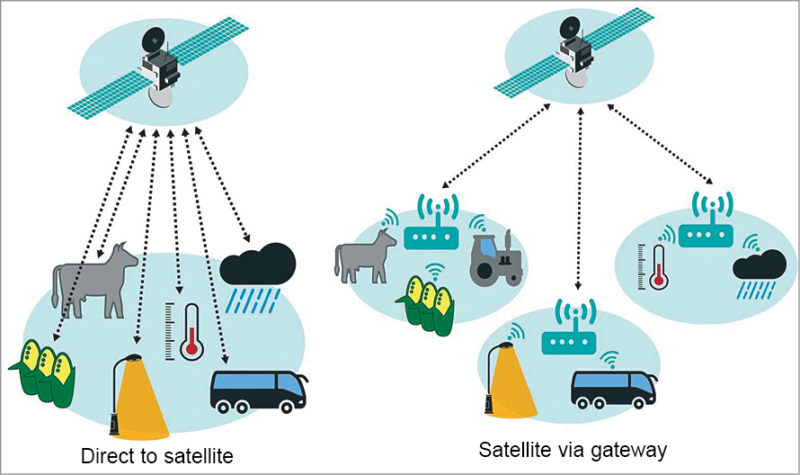 Satellite and IoT operators will need a complete understanding of the different components utilised in IoT applications, including the integration of IoT dashboards in business infrastructure to offer end-to-end services. Although a satellite has good bandwidth, many options come with larger equipment and higher battery usage than most terrestrial ones, which poses a challenge to large-scale adoption. One such example is Dutch startup Hiber’s nano-satellite powered solution that aims to resolve such issues. Also, advancements in communication satellites are slowly making it possible to provide a greater range for transmitting data to the cloud via a single robust network of satellites.