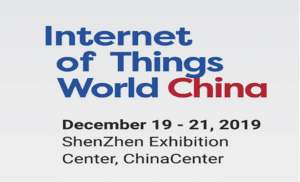 Industry leaders and influencers from across the globe will come together and discuss on the latest technology trends and innovations that are rapidly enriching the Internet of Things (IoT) world at an upcoming event in China.

Scheduled to be held from 19 to 21 December 2019 in Shenzhen Convention & Exhibition Center, IoT World China 2019 will see participation of more than 800 exhibitors from across the globe.

The event will be held in conjunction with ELEXCON, Embedded Expo, EV & Autotronics China and the 5G Summit.

Analysts, strategists, technologists, developers and implementers will join the event to discuss on emerging technology trends such as 5G, AI, big data analytics and NB-IoT.

Participants will also get a chance to get a glimpse of China’s booming IoT market and the entire industrial chain of IoT.

China is forecast to dominate the IoT market by 2025, and the rapid growth of its IoT sector is attributed to factors such as massive population, increasing urbanization, government support as well as technological advancement especially in smart home appliance, smart city as well as industrial IoT segment.

The smart home appliance segment is surging, and maximum share of the market is being captured by major Chinese giants such as Haier, Midea, Gree and Xiaomi.

Mentioned also be made that BAT and three major state-owned telecom companies have already built their own PaaS platforms to support IoT cloud service.

In addition, the country’s chip makers such as Huawei Hisilicon, Unisoc and Cambricon are now competing with some of the leading players in the industry including ARM, Qualcomm and Cypress, etc.

Fobi Releases Next Generation of its Proprietary IoT Device, Fobi 3.0