Amour 3.0 allows users to switch, schedule, lock and obtain the power consumption analytics for past usage. The product is made from scratch in India. 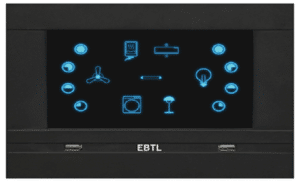 Delhi-based Automation System Manufacturer EBTL Pvt. Ltd has launched a new version of Amour, a mobile assisted smart switching solution for homes. The product is made from scratch in India itself.

The Amour 3.0 works on Wi-Fi and can be controlled by touch, smart phones and voice commands. This programmable switch allows the user to switch, schedule, lock and obtain the power consumption analytics for past usage, EBTL  said.

“With one time setting, you can switch on or off your device at any time, as many times as you want,” EBTL  said.

According to the company, Amour 3.0 has been developed keeping in mind the sentiments and desires of people who love their homes.

Amour 3.0 board comprises of a panel that controls 7 channels – 5 switches of 10 Amp (Lights, Fans, Small appliances… etc), and 2 switches of 30 amps.

There are two sets of dimmers to help set the intensity of light or regulate the speed of fan. Icons for lights or fans can be set as per need.

The panel is fully customizable with faceplate colors matching the walls and icons for user’s needs. The always glowing intuitive icons on the board make it easy for the user to figure out electrical equipment attached.

No special wiring is required for installation of Amour 3.0 as it can be used with the existing wirings. It takes only minutes to be installed and made ready to use.

It works well with the inverter and in case of a power-cut, it remembers the state of the switches and restores the active devices back. The panel is completely shock proof, meaning one can touch the screens even with wet hands.

The Amour Mobile App connects to both Android and iOS “Apple” phones using Wifi technology. In simple words, anyone who is carrying a phone with Wifi is carry a remote to operate Amour panel.

The App enables users to select their favourite selection in a room. “Once ‘favourite selection’ is defined you can simply click on the favourite button given on the Mobile App and the defined lights/fans/AC etc. will be operational,” the company said.

Founded by IIT Kharagpur alumni in 2013,EBTL started with a simple idea of making shock-proof switches. The concept has now evolved over the years into a wall mounted smart switch, Amour.

Legrand to Focus Acquisitions Based on IoT, Automation

Penetration of Smart Gas Meters in Europe Reached 33% in 2020

Most IoT Attacks Originated in China, US and India: Zscaler Report