Established in 2009, PB Traffic supplies traffic management equipment and portable traffic lights for roads, major infrastructure projects, and specialist operations. The company owns and operates 110 portable traffic light systems, each valued at over NZ$20,000. These have been deployed for the Puhoi to Warkworth motorway (NX2), Clevedon Water, Kaikoura SH1 rebuild, and other major infrastructure projects.

Historically, PB Traffic would lose an average of two traffic light systems annually, with some going missing while others were stolen by individuals attempting to profit from reselling the internal batteries. To reduce the risk of recurring financial hits of about $60,000 per year – and the threats to driver safety when lights aren’t present to control traffic – the company turned to real-time asset tracking technology from Pollin8 and Thinxtra. 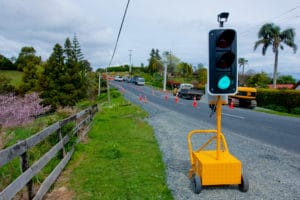 “As well as being a lost asset, roads missing functioning traffic lights create huge safety risks. It increases the chances of head-on accidents when the light on one side is stolen or vandalised, and this quickly triggers significant congestion which causes stress for drivers and pedestrians,” said Akshay Gupte, General Manager at PB Traffic.

“We therefore needed a tracking system to give us full oversight of our traffic light systems no matter where they are, and the ability to understand whether they are working as expected. With Pollin8’s IoT devices and software plus Thinxtra’s 0G Network, we have a cost-effective and efficient solution that works beyond the standard capabilities of GPS tracking.

PB Traffic has installed Pollin8’s battery-powered devices to its full fleet of signal lights, which record and transmit data in real time. The information is communicated over Thinxtra’s national 0G Network, and is viewed through Pollin8’s comprehensive web and mobile applications.

“Our team can now view life traffic conditions from our headquarters to understand how the lights are performing in every location, plus the benefit of adjusting the timing of signal light changes to prevent road congestion and accidents,” Gupte said.

In two instances where PB Traffic’s lights were stolen, the company worked with local authorities to locate and retrieve the systems in real time before they could be resold. Although the traffic lights lost power, Pollin8’s tracking devices, with a battery life of up to five years, continued to provide location data as they operate independently.

Nick Pickering, CEO at Pollin8, said, “As a supplier of traffic management solutions, PB Traffic has incredible responsibility for the safety of all persons impacted by its systems. Taking the guesswork out of asset management with our IoT devices and Thinxtra’s national connectivity means the organisation can focus on proactively managing theft and optimising traffic flow, making roadworks safer with less impact on commuters.”

Nicholas Lambrou, CEO at Thinxtra, said, “PB Traffic provides crucial safety assets for some of New Zealand’s most important infrastructure development and construction projects. By using real-time tracking powered by the Internet of Things, PB Traffic has created an invaluable safety net that not only ensures its traffic light systems are in the right places and working as intended, but keeps workers, drivers and pedestrians safe during their commutes.”