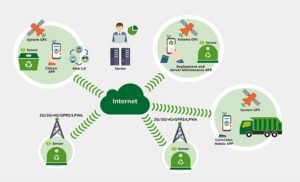 Slovakia-based Sensoneo’s waste management is currently deployed in 40 countries around the world. The company supports other low-power connections such as SigFox and 2G.

Sensoneo’s Smart Waste Management solution monitors waste levels, picks-up status of each bin, and the real-time temperature of bins. Sensoneo provides apps for the operators, drivers and citizens to manage the trash and report any garbage-related problems.

Sensors send out 53 bytes per data transmission and the low-power system’s battery lasts for years.

Michael Basila, CEO and founder, Sensoneo, says that one of the features of NB-IoT is that it has “very good signal coverage.” The narrowband signal can handle even underground connections.

He claims that it is “ten times better” than previous GPRS offerings.

T-Mobile was the first US carrier to launch its nationwide NB-IoT LTE service in July 2018. This is the first commercial deployment to use Twilio SIM cards.