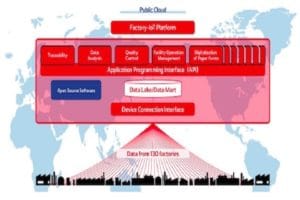 DENSO Corporation, a developer and manufacturer of advanced technology, has announced that it has developed a Factory-IoT Platform that connects 130 production factories worldwide with information technology (IT) and Internet of Things (IoT) technologies, based on the concept of “as if under one roof.”

The cloud-native platform has been built after a two-year development period and implemented in October 2019 using open-source-software in the automotive supplier industry.

The newly developed platform stores data collected from a variety of equipment at various production sites in a single cloud that can be used freely across DENSO’s organisation.

During the development process, the focus was on three points:

By connecting factories around the world in the cloud, the technology strengthens global production system, enables factories to respond immediately to production changes based on local demand and allows production teams to conduct real-time analysis of the movement of workers and operation statuses of different facilities.

Additionally, technical engineers in the field can incorporate digital power using their own software into the physical improvement activities accumulated over many years. This will help accelerate gains in efficiency, quality and cost savings. For example, by linking various devices, it will be possible to notify equipment abnormalities and more to the operator.

Along with linking 130 factories around the world to the newly developed platform, the company aims to promote education to make full use of the platform and develop application developers.