IoT Analytics recently released an interesting study of the IoT semiconductor market, which claims that semiconductors are strongly outperforming other segments within the technology sector. And it is all thanks to IoT! We share key extracts of the report and of the interview we did with Satyajit Sinha—a key force behind this report.

The Philadelphia Semiconductor Index, which tracks the value of the thirty largest semiconductor firms globally, has increased by a factor of 5x in the last five years (from US$80 in January 2016 to US$416 in January 2021). The index not only easily beats the high-flying Nasdaq index (which increased by a factor of 2.8 in the same timeframe) but also other technology indices, such as cloud computing (the SKYY Index increased 3.5x in the same period).

Most notably, the industry has profited from the need for more and higher-value semiconductor components for several newly emerging technologies. Key drivers include big data analytics, mobile communication, gaming, connected and semi-autonomous cars, and, to a large degree, the fast growth of connected Internet of Things (IoT) devices.

The number of active IoT device connections are estimated to have grown from 3.6 billion in 2015 to 11.7 billion in 2020. By the end of 2025, a total of 30 billion IoT connections is being forecast. The rise of the IoT semiconductor market is broad and touches most industry segments, including industrial, automotive, energy and utilities, and healthcare.

Consumer IoT devices, such as smartwatches and smaller wireless accessories, have seen a particularly high demand in recent years, which has prompted several companies that were not making IoT devices a few years ago to move into the IoT ecosystem, including many smartphone makers.

The current IoT device explosion will continue to drive the IoT semiconductor market and will likely lead to further semiconductor innovations amid higher production volumes. IoT Analytics latest report on this topic forecasts the IoT semiconductor component market to grow at a CAGR of 19% from US$33 billion in 2020 to US$80 billion in 2025. In particular, four components will be in the spotlight: IoT microcontrollers, IoT connectivity chipsets, IoT AI chipsets, and IoT security chipsets and modules.

IoT Analytics research shows that the following four stand out in importance:

1. IoT microcontrollers (MCUs). In contrast to many other technology topics, IoT has a characteristically diverse set of use cases and applications. All these applications demand different levels of performance and functionality. Often, MCUs (rather than MPUs) are a good fit to deliver the required flexibility (for example, in terms of processing power) while at the same time presenting a very economical hardware choice for the application. An interesting trend is that IoT MCUs have now evolved from general-purpose MCUs and are sometimes becoming IoT application-specific MCUs that cater to the exact requirements posed by a specific IoT application (for example, in Q4 2020, NXP launched S32K3 automotive IoT MCU series).

On the back of these trends, IoT Analytics expects the penetration of IoT MCUs in the general MCU market to grow from 18% in 2019 to 29% by 2025. Particularly 32-bit MCUs, which can be found in devices such as the well-known Raspberry Pi, represent a sweet spot for IoT applications.

Cellular chipsets currently play a large role in the market growth of IoT connectivity chipsets. IoT Analytics expects the global cellular IoT chipset market to grow at a CAGR of 37.5% between 2020 and 2025, driven by 5G (used for low-latency and high-bandwidth IoT applications) and LPWA (used for low-power, low-bandwidth, low-cost IoT applications). Both the licensed/cellular LPWA market and the unlicensed LPWA market drive the market with LoRa based and NB-IoT based chipsets set to continue to dominate this market segment.

WLAN chipsets are driven by the new Wi-Fi 6 and Wi-Fi 6E standards that create high growth opportunities in the IoT Wi-Fi chipset market. With almost four times higher throughput capacity than Wi-Fi 5, the upgrade to Wi-Fi 6 opens the door for IoT applications with higher bandwidth requirements, such as augmented reality headsets.

3. IoT AI chipsets. Many applications look for more complex data analyses and for these data analyses to be performed in real time. In recent years, this has created an increasing demand for embedded AI chips at the IoT edge. IoT Analytics expects the global IoT AI chipset demand to grow at a CAGR of 22% between 2019 and 2025. This growth would be driven by parallel computing offered by three different types of chipsets: GPUs, ASICs, and FPGAs. FPGA based AI chipsets are of particular importance for the cloud as well as in the 5G era. The chips help reduce latency, improve memory access, and make communications between devices much more power-efficient.

Traditionally, data centres have used FPGAs as sidecar accelerators to a CPU. Recently, however, companies such as Microsoft have started using FPGAs in the data path where high-speed Ethernet connects directly to the FPGA instead of the CPU.

4. IoT security chipsets and modules. According to Nokia’s Threat Intelligence Report 2020, IoT devices now make up 32.7% of the infected devices observed. The share of IoT infections increased by 100% in 2020. The rise in threats for IoT devices requires constant adaptation of security solutions. In many cases, traditional software security is seen as insufficient for the overall security architecture. Thus, there is a unique need to secure hardware alongside the data flow from edge devices to the cloud.

Although companies generally have various options where they implement embedded hardware security, implementing it at the MCU/SoC level is proving most advisable as it allows the data to securely flow through the internal bus. This can be done by embedding secure elements (SEs) and physical unclonable functions (PUFs) to the system within the devices.

Another important security feature is ‘key injection’ in the secure enclave/PUF and cryptographic key management to ensure the devices’ secure identity and the creation of a secure tunnel of data flowing within the device and from the device to the cloud. This integration enables a ‘hardware root of trust’ with asymmetric encryption. It also creates a secure tunnel for the safe flow of data from chip to cloud, ensuring data security at rest and in transit. 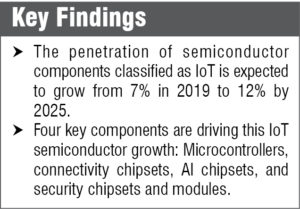 The market for IoT semiconductors is still in its infancy. With the penetration of semiconductor components classified as IoT expected to grow from 7% in 2019 to 12% by 2025, topics such as IoT MCUs, IoT connectivity chips, IoT AI chipsets, and IoT security chipsets will see growing importance in the coming years. It is hard to imagine that the semiconductor index can increase its value by another 5x in the next five years. But it is certain that IoT, more than ever, will be a driving force for these semiconductor companies and can provide significant new business.

The Future Of Present Technologies