The Internet of Things (IoT) has the potential to bring the next industrial revolution, transform society and establish a new ecosystem to serve not just humans but humanity. In an IoT-enabled world, people will receive uniquely personalised services on demand, while societies will benefit from optimised resource use with minimal impact on the environment.

Interactions between humans and machines are on the verge of a radical shift with the potential to unlock immense possibilities facilitated through the concept known as the IoT. With simultaneous advances in technologies such as artificial intelligence (AI) and machine learning, these conversations can enable devices to anticipate, react, respond and enhance the physical world.

The IoT is well-poised to usher in the next technological revolution since the time of the Internet. It has been drawing more and more attention as the world turns increasingly digital. There is no doubt about the value the IoT has unlocked so far and its potential to change lives.

As the world gets increasingly connected, the global IoT spending is set to increase significantly over the coming years. Though there are still nagging security concerns with the IoT—that are yet to be addressed—a study by Cradlepoint (industry leader in cloud-delivered 4G LTE network solutions for businesses, service providers and government organisations) reveals that close to 70 per cent organisations have adopted, or plan to adopt, IoT solutions within the next year. Gartner forecasts 20.8 billion connected devices by 2020. Bain predicts the combined markets of the IoT will grow to about US$ 520 billion in 2021, more than double the US$ 235 billion spent in 2017 (Fig. 1).

India is rapidly growing as an IoT hub. Although, the country began its IoT journey much later than developed economies, its installed base of connected units is expected to grow at a rate much faster than them. According to a Deloitte report, the IoT units in India are expected to see a rapid growth of ~32x to reach 1.9 billion units by 2020, from its current base of 60 million. As a result, the Indian IoT market is expected to grow ~7x to move from US$ 1.3 billion in 2016 to US$ 9 billion by 2020 (Fig. 2). Key technology factors enabling IoT adoption in India include sensors, networks, standards, augmented intelligence and augmented behaviour (Table I).

Rise of the tech-savvy consumer along with increasing smartphone and mobile Internet penetration is driving consumer IoT applications in the Indian market. However, the consumer IoT adoption is expected to be slower than the IoT adoption in industrial applications due to cost of IoT devices, security as well as privacy concerns of consumers.
The Indian IoT ecosystem consists of a diverse set of stakeholders including hardware vendors, software application vendors, network operators and system integrators. Interestingly, 60 to 65 per cent of these stakeholders are startups. The IoT presents opportunities for all stakeholders across the value chain.

However, according to the Deloitte study, application vendors focussing on both vertical and horizontal solutions, including consumer and industrial IoT (IIoT), are expected to garner 50 per cent share of the Indian IoT market. Along with applications suitable for a large segment of consumers, customised solutions for niche consumer groups are also gaining importance. Hardware vendors are focussing more and more on R&D to develop and expand their product portfolio in the IoT and to enhance their market share through mergers and acquisitions.

Network operators are increasing investments in new networks, such as SigFox, to increase connectivity revenues. System integrators are focussing majorly on IoT consultancy and implementation services, while enhancing digital capabilities and building solutions for the IoT through acquisition of niche companies and platforms. Startups with innovative solution portfolios are playing a significant role in driving the growth of the IoT in India.

The IoT adoption in India is expected to grow across industries. Some key industry sectors driving it are transportation and logistics, utilities, manufacturing and automotive. These are expected to see highest adoption levels in India due to direct association with smart city projects. Moreover, sectors such as healthcare, retail and agriculture are also expected to make significant progress in IoT adoption.

The IoT applications in India across industry sectors can be bucketed under three broad categories: consumer, industrial and public sector. 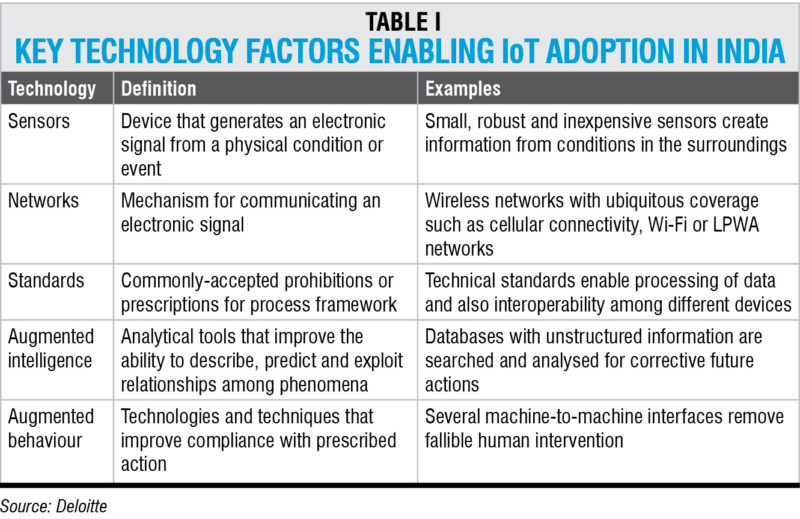 Consumer applications of the IoT

While organisations expect the IoT to increase automation and therefore improve productivity, consumers expect it to improve the overall quality of life. A research conducted by Tata Communications, presented in Fig. 3, showcases consumer expectations from the IoT.

The perception of the common people regarding the IoT is limited. A large number (~35 per cent) of people from the same survey mentioned above relate the IoT with only smartphones. Although this is not incorrect, the IoT is much more than just phones. Only ~14 per cent of all people surveyed (Fig. 4) mentioned all connected devices.

Although most of the current developments in the IoT are focussed on industrial opportunities, there has been traction in the consumer space, too. The IoT applications for consumers are opening new and intimate entertainment experiences. Shifting consumer preferences towards smart sensors, wearables and clustered systems, like fitness trackers or smart homes, are triggering growth in the consumer application of the IoT.

Smartphone applications that can lock doors, reset thermostats and more already exist. Firms are coming up with ways of cooking that can be done and monitored from the comfort of the living room sofa through the smartphone. Increasing sophistication of sensors makes it possible for devices to understand consumers at unprecedented levels.

Industrial applications of the IoT.

Globally as well as in India, industrial adoption of the IoT has far exceeded consumer applications. The term Industry 4.0 heralds the coming of a new industrial revolution through smart manufacturing. The IoT is expected to drive operational efficiencies through automation, connectivity and analytics.

Industrial applications broadly include improved automation, efficient tracking and effective management through connected systems. In India, such sectors as manufacturing, automotive, transportation and logistics are experiencing the highest adoption levels of the IoT. Typical industrial applications include:

Public sector applications of the IoT

The IoT has significant applications in the public sector as well. The chart given in Table III lays down the potential end use of the IoT in this sector. In India, the government’s push for smart cities is expected to be a key enabler for IoT adoption across a large number of these areas

Challenges to be addressed

Even though the IoT is creating, and will likely continue to create, immense opportunities for both industry and consumers, it is not without its share of risks.

As is common when anything new comes onto the stage, legislators across the world are looking for ways to incorporate new regulatory frameworks to plug relevant holes of the IoT and ensure its smooth functioning. To realise the full potential of the IoT, businesses and governments need to work together to overcome the impediments that lay in its path.

Cyber security has already gained notoriety across the world due to increased incidents of cyber-attacks, espionage and data breaches. With the number of connected devices increasing and virtual and physical worlds seamlessly integrating, present security measures will no longer remain adequate. Organisations will require enhanced security frameworks from device-level authentication and application security to system-wide assurance, resiliency and incidence response models.

Another critical hurdle is the lack of interoperability among existing systems, which will significantly increase the complexity and costs of IoT deployments. Present-day technologies work largely in silos. However, in the future, a full-functional digital ecosystem will require seamless data sharing between machines and other physical systems from different manufacturers.

Although it is perceived that value-added services such as applications and system integrations will be the significant revenue driver, hardware is also likely to generate sizeable revenue through its sheer volume of deployment. This would no doubt impact the demand for electronic components. Individual IoT devices will inevitably require a microcontroller (MCU) to add intelligence to the device, one or more sensors to allow for data collection, one or more chips for connectivity and data transmission, and a memory component. Connected devices that transmit information across relevant networks rely on innovation from semiconductor players—for instance, highly-integrated microchip designs and very-low-power functions.

A new array of sensors based on microelectromechanical systems (MEMS) technology is rapidly being developed to enable IoT applications beyond motion and image sensing.

These would include applications that measure humidity, altitude, food calorie composition and various human health indicators. 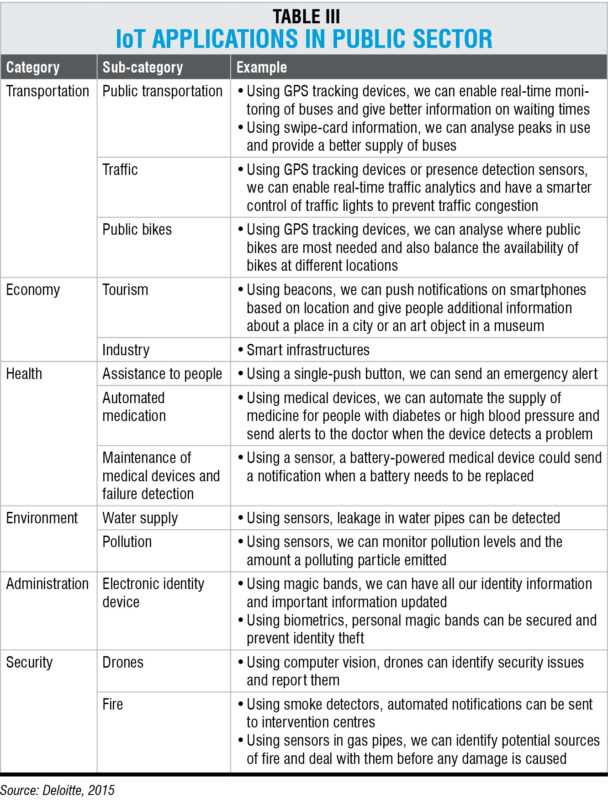 With connectivity being a key capability required in IoT applications, multiple communication standards and protocols are being supported by consumer electronics and industrial devices, like low-power and personal area wireless mesh networks, which are primarily suited for sensors. IoT applications usually require a single chip in an acceptable form factor and low power consumption for battery-operated devices. This requirement is a factor for growth in SoCs with embedded cores, GPUs and integrated wireless connectivity in a single package. Progress in these technologies has allowed the development of such IoT devices as sensors that have compute, storage and network capabilities built into extremely small form factors, yet with low energy requirements.

India should look to build capabilities across areas such as sensors (to adapt to rugged climate/terrains in India) along with network infrastructure, standards and so on. Accelerators and incubators in India are already enabling startups to build innovative IoT solutions. Addressing current talent gaps in terms of cross-functional as well as specialised skillsets is imperative for the growth of the IoT in India. 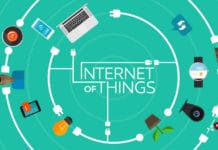 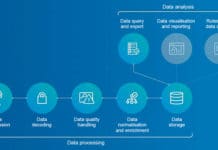 Editor Team - February 28, 2020
This centre will be headed by Murali Krishna, senior vice president and country manager, Providence India The company aims to modernise the world...

Cloud Transformation Ranks Amongst The Top Three Priorities For CIOs in India: Report

Editor Team - February 26, 2020
LoRa Edge reduces the bill of material (BOM) costs of devices and design and procurement complexity said the company The company has made...

IoT is Definitely a Transformative Opportunity