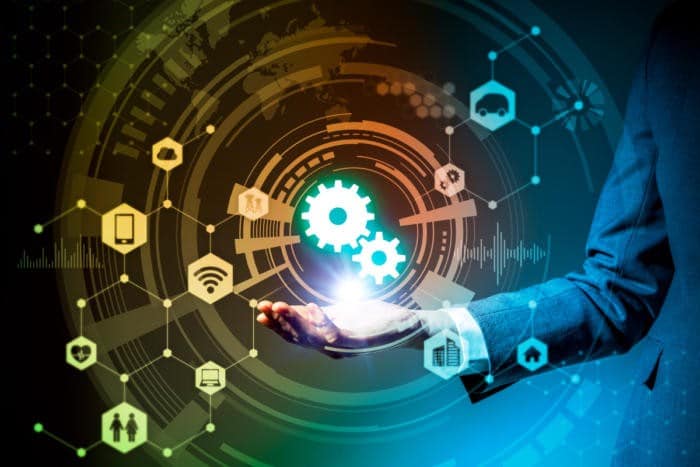 Internet of Things (IoT) has been on the hotbed of activity for the last several years. While till about 2015, IOT was at its peak of ‘Gartner Hype Cycle’, the euphoria has died down considerably with many others like AI and blockchain taking its slot at the top. IoT is on a downward path of the Hype cycle now but as the authors have articulated in previous posts, articles and interviews, IoT, especially Industrial IoT, would see steady but slow progress over a decade. IT deployment and automation took decades and the adoption did not happen overnight.

While the IoT story in consumers, homes, logistics and automotive sectors have taken off in a reasonably big way with several tens of millions of devices being deployed, the Industrial IoT deployments have been relatively slow. While there have been several small to mid-scale pilots, the infrastructure in industrial settings has several complicacies and lack the simplicity and standardization of the consumer side.

Industrial IoT, especially in factories, is also mired with business RoI, cultural and organizational issues that slow down its deployment primarily because of misalignment between workers, managers and owners. This has been talked about in several settings and we had a classic example on how Bharat Forge overcame this and executed on its Digital Transformation comprehensively at IoTNext 2018.

In terms of the technical aspects, factory automation has been non-standard, using age-old protocols and different brands. Hence IoT systems in an industrial scenario have to be extremely versatile. Just basic connectivity of sensors and sending every bit and byte of data to the cloud severely restricts Industrial IoT deployments and the cost goes up significantly.

It is to be noted that bringing Internet connectivity to the shop floor is a relatively new concept. Also, no factory will ever replace their machines overnight with new and smart IoT enabled machines from OEMs. Industrial systems in the near future will continue to remain a hodgepodge of different systems, some having a robust implementation of PLC systems and SCADA networks, others running full manual. ‘Don’t touch it, if it is not broken yet’, ‘Let it fail, before we replace’, ‘AMC contractors coming periodically to test and maintain’, ‘misuse of machinery is common’, ‘clueless about power quality impact to machines’ are the usual patterns we see not just in the developing countries but also in developed markets as well.

The following series of articles is based on real practitioners’ viewpoints, over five years of learning across industries, observation of a plethora of IoT deployments and startup failures, discussions with several IoT vendors and systems integrators and real-life experience from running a full-fledged IoT system involving several thousands of devices. Below are the topics that we intend to cover in this series.

Interestingly, most of these above aspects are either not required or are side-stepped during Pilot and Proof of Concepts, but they come back to bite you as you scale.

While we will discuss each of the above aspects in subsequent articles, let us focus on the overall IoT and analytics architecture here for industrial use cases.

A versatile and flexible architecture that works both at Edge, In-premise and Cloud

IoT is all about sensor data. These data are recorded in the cloud or in edge with a timestamp. The timestamp indicates the time of data origin and hence sensor data is a classical time series data. The challenge is on how to extract useful analytics or actionable intelligence out of these sensor signals. Some of the issues like the elimination of noise, detection of artifacts from the signal trend can be solved using traditional signal analysis. Additional areas to consider are infrastructural issues and end-user requirements and restrictions, running the signal analysis on a platform that can easily be ported into cloud, edge or on-premise. There are difficulties associated with extracting the signal artifacts too quickly or over a larger period of time using the same computational system.

We believe that the entire signal analysis ideally has to be done by an edge platform for sensor signal analysis and transforming that analysis into actionable intelligence using a diverse set of architecture such as working with sensor edge, edge cloud or a public cloud (like Azure PaaS/IaaS). Sometimes even a cloud is not required, factories want to connect the data to a platform straight to HMI or mobile app or to a desktop app. Industrial 4.0 is not yet standard and therefore, it makes sense to offer an architecture which is highly flexible and offers all the cross-platform importing/exporting capability.

So what does the Flexible Edge Architecture really mean?

Edge analytic or edge computation is set on a massive growth path. However, in the context of a factory or commercial building, edge architecture can penetrate into the diversified system architecture. Edge computation can happen with sensor electronics as close to the sensor as possible, it can happen on a gateway device, a PC or server connected to the Gateway or Router, a factory cloud which may be a server inside the factory or an external public cloud framework. The whole system may or may not be connected to a public cloud (like AWS or Azure) depending on end-customer requirements and restrictions.

Due to lack of a unified or standardized architecture of Industrial 4.0, it is extremely important for OEM (who wants to make a smart machine) to be cognizant of the reality that their customers (manufacturing plants) may or may not allow external cloud. Many may not have a factory cloud. They may or may not want the data to be displayed in PLC. They may want the system to be incubated into a major Industrial IoT PaaS platform like Azure IoT PaaS or Siemens Mindsphere, or these might be too costly propositions for them. 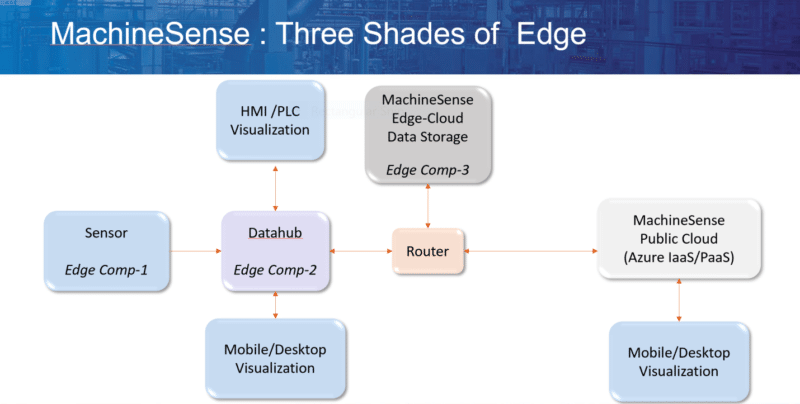 MachineSense.com also went through its own set of learning, spending enormous resources with each customer with its ‘public cloud only’ approach and had to re-engineer and re-architect its entire platform to be completely flexible, with the ability to feed data to any form of repository, be it a resident computer, a handheld device, an in-premise cloud or an external cloud. The architecture had to adapt to the requirements, had to be scaled up or down based on the restrictions.

Subsequent articles will focus on the challenges in larger scale deployment and what are the typical ways to mitigate and address them. Many platforms do not provide these bells and whistles to manage and hence a lot of watchdogs, calibration routines, automation tools had to be built to ensure smooth operation for a large IoT deployment and to manage the device efficiently.