There has been tremendous development in the field of robotics and the Internet of Things (IoT) in the past few years. Both of them seem to be complementary to boost efficiency, reduce costs, and achieve automation at large.

IoT is a system of uniquely identifiable interrelated/interconnected devices. The term IoT was first used by Kevin Ashton in 1999, and Mark Weiser is said to be the first person to have conceived this idea in his scientific paper titled ‘The Computer for the 21st Century’ in 1991. 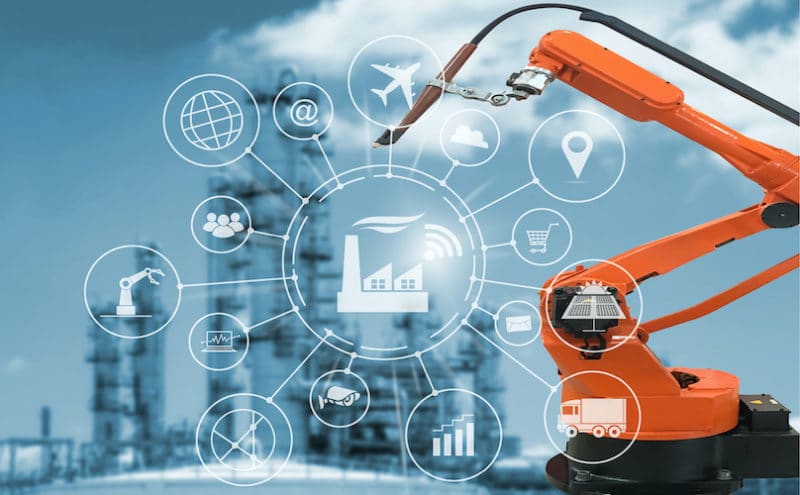 The ‘connected’ things in IoT are used to perform remote sensing, actuating as well as monitoring capabilities. Any natural or man-made entity that can be assigned an Internet Protocol (IP) address and can transmit data over a network is a ‘thing’ in the Internet of Things. IoT expands the ability to collect and transmit information and communicate over the current Internet or any compatible network of these uniquely addressable objects.

It expands the influence of the Internet beyond computers and smartphones to a wide variety of other devices, mechanical and digital equipment, objects, animals or humans, items, processes, and environments using some type of embedded systems like processors, sensors, and communication hardware. The data transfer process can happen without requiring human-to-human or human-to-computer interaction. Any contact is often to provide them with high-level commands such as setting up, obtaining information, or instructing them to interpret data. The data analysis can happen locally or using cloud services.

Until recently, the automation of robots, or other automated systems, has been relatively easy. This doesn’t mean the equipment itself is not complicated—but that the functions and responsibilities they perform are mostly simple. Robots are, after all, built to perform routine activities that aren’t often suited for human workers. However, thanks to the IoT, that’s evolving rapidly.

The concept of usage of cloud services in robotics and IoT domain opens a new domain—the Internet of Robotic Things, which could be an advanced version of cloud robotics and an extension of IoT to leverage the capability of data monitoring to machine intelligence and intelligent agents to perform the given task quickly and repeatedly with efficiency.

In the creation of fully autonomous robots, IoRT (Internet of Robotic Things) would be a central idea that will help enterprises and individuals gain greater insight into and control over structures and environments. And by doing so, IoT allows organisations and entities to perform more important and higher-level work around the world while minimising overheads for activities such as maintenance and upgrades.

The robot, when connected to IoT devices, extends embedded monitoring and sensing capabilities, apart from the onboard sensor capacity, and thus, it can leverage local and distributed intelligence as it gets access to analysed data and pre-trained models from stored data on the cloud as well as real-time data analysis. Based on the sensor data and analysis of physical events, intelligent decisions can be made as to what action to take.

The architecture of the Internet of Robotic Things can be divided into 5 layers such as: 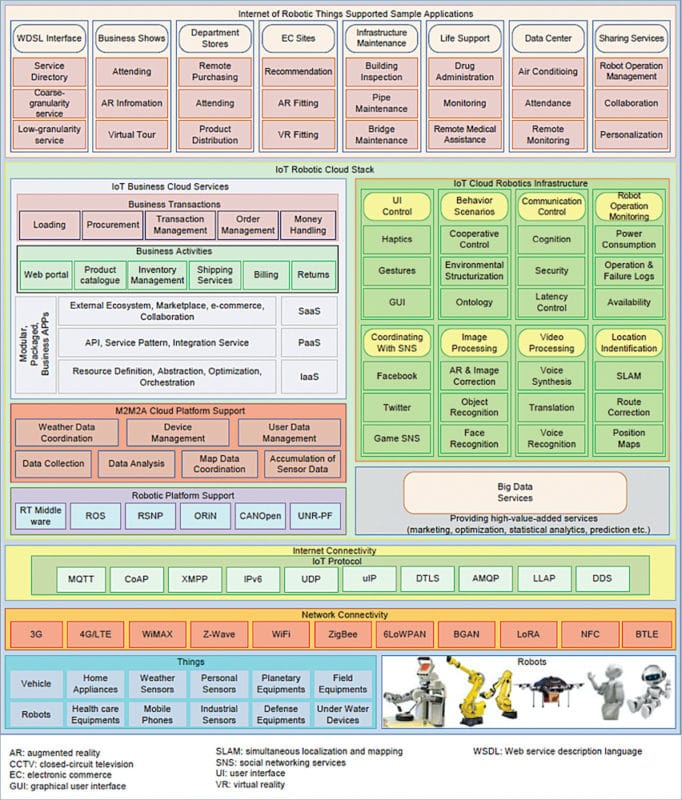 The efficiency of a robot can be increased over time using machine learning (ML) models and strategies. A human won’t repeat the same mistake of picking up a light object and dropping over and over again. In the same way, a robot could be programmed to improve its performance using the datasets they collect and analyse. IoT devices have different sensors that are capable of registering changes in pressure, motion, temperature, light, sound, etc. Thus even a minute change can be recorded from sensors placed onboard as well as in surroundings.

Cobots are robots that collaborate with humans in their (shared) tasks, without replacing them entirely. Thus complex tasks that require care, or the tasks for which robots have not been designed, can be handled by humans, while labour-intensive and repetitive tasks can be automated. This setup can be most useful in small shops and large warehouses.

Sensors, actuators, and robot actions generate a lot of data, and with the integration of Big Data, ML, and AI algorithms, we can dive deeper into making informed decisions, predicting trends, marketing, etc. IoRT devices are going to be the buzzing topic of investment for product and technology giants in the coming years.

It enables optimal synchronisation. When machines can communicate with each other seamlessly, there can be endless possibilities to explore. Synchronisation can prevent manufacturing defects or even help in attaining an extremely high level of accuracy. Instead of only a single system or part, a better and more mindful environment or process is generated as a whole.

Researchers are working on not only transforming the field of robotics but the usage of IoT in other areas as well.

The major challenges in this field include:

Completely different and well thought architectural frameworks are required that can handle complex issues and a large amount of data.

With network connectivity and robots at work for important tasks, security becomes crucial, and evolved methods have to be implemented for this.

A major application will be in the e-commerce market. IoRT will drive healthcare, domestic appliances, and vehicles primarily through smart devices and smart robots. The biggest impact IoT has brought to mankind is the capability of real-time data monitoring analysis and decision, and seamless integration into human and information networks.

Dr Rajiv Kumar Singh holds a PhD in Electronics Engineering from the Indian Institute of Technology (BHU), Varanasi, and is currently employed with the Institute of Engineering and Technology (IET), Lucknow, as an assistant professor. Previously, he was associated with BSNL.